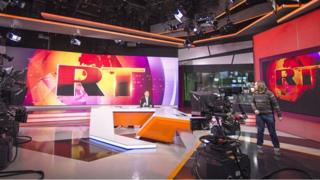 Russia targets US media in row over RT registration

Russia is preparing to retaliate against US media after Kremlin-backed broadcaster RT was told to register in the US as a "foreign agent".

Russia will adopt "broader" measures which "may include social media networks", a top pro-Kremlin MP said.

RT has been singled out as a propaganda outlet in the wake of alleged Russian meddling in the US presidential vote.

CNN, Voice of America and Radio Free Europe/Radio Liberty were named as likely targets for the new Russian law.

A Russian senator involved in media policy, Alexei Pushkov, said those US media organisations "should be subject to restrictions, including their services as part of cable TV packages".

Sergei Neverov, parliamentary head of the pro-Kremlin party United Russia, said "we'll not just draft proposals, but a commission will work out broader measures, which may include social media networks".

Earlier an RT statement said the US Department of Justice "has given the broadcaster until Monday to register as a foreign agent, otherwise the channel's head faces arrest and its accounts could be frozen".

The instruction comes under the Foreign Agents Registration Act (FARA), adopted in 1938 to counter pro-Nazi agitation on US soil.

RT says it will challenge the US requirement in court.

"It contradicts both the democracy and freedom of speech principles. It deprives us of fair competition with other international channels, which are not registered as foreign agents," said RT editor-in-chief Margarita Simonyan.

FARA applies to those engaged in political activity for a foreign government. It would require RT to label anything it produces – making it clear its reports are distributed on behalf of the Russian state.

Charities and other civil society groups operating in Russia have to register as "foreign agents" if they get any foreign funding.