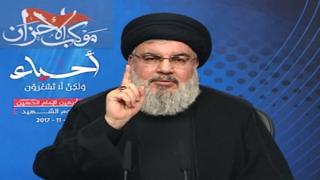 The leader of Lebanon's Hezbollah has lashed out at Saudi Arabia, days after Lebanese PM Saad al-Hariri announced his resignation in the Saudi capital.

Hassan Nasrallah said Saudi Arabia had declared war on Lebanon, and was holding Mr Hariri against his will.

He also accused the Saudis of inciting Israel against Lebanon.

The powerful Hezbollah Shia movement is an ally of Iran, which has been trading accusations with the Saudis of fuelling tension in Lebanon and the region.

Mr Hariri said in a TV broadcast from Riyadh on Saturday he was stepping down because of an unspecified threat to his life. He also attacked Hezbollah and Iran.

Mr Hariri has still not spoken publicly since his announcement.

What did the Hezbollah leader say?

Mr Nasrallah said at the weekend that Mr Hariri had been forced to resign by the Saudis, but he repeated the allegations on Friday, saying that this was now "beyond any doubt".

Saudi Arabia was attempting to remove Mr Hariri as prime minister and impose a new leadership on his political movement, he said.

"Any offence to the Lebanese prime minister is an offence to all Lebanese, even when he is our adversary."

Mr Hariri's Future Movement is seen as opposed to Hezbollah politically, even though they both sit in government.

There are fears Lebanon could become embroiled in a wider regional confrontation between Saudi Arabia and Iran.

Tensions between the three countries have soared since Mr Hariri announced his resignation.

But US Secretary of State Rex Tillerson warned against Lebanon being used for a proxy conflict, adding that the US strongly backed Lebanon's independence.