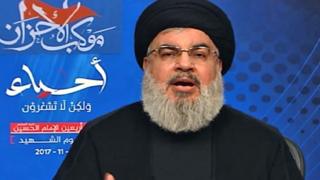 The leader of Lebanon's Hezbollah has accused Saudi Arabia of declaring war on his country, days after Lebanese PM Saad al-Hariri announced his resignation in the Saudi capital.

Hassan Nasrallah said Saudi Arabia was holding Mr Hariri against his will.

He also accused the Saudis of inciting Israel against Lebanon.

The powerful Hezbollah Shia movement is an ally of Iran, which has been trading accusations with the Saudis of fuelling tension in Lebanon and the region.

Mr Hariri said in a TV broadcast from Riyadh on Saturday he was stepping down because of an unspecified threat to his life. He also attacked Hezbollah and Iran.

Mr Hariri has still not spoken publicly since his announcement.

What did the Hezbollah leader say?

In a televised speech on Friday, Mr Nasrallah said Saudi Arabia was trying to provoke fighting amongst the Lebanese.

"In short, it is clear that Saudi Arabia and Saudi officials have declared war on Lebanon and on Hezbollah in Lebanon, but I have to say this is a war on Lebanon," he said.

At the weekend the Hezbollah leader had said that Mr Hariri had been forced to resign by the Saudis, but he repeated the allegations on Friday, saying that this was now "beyond any doubt".

Saudi Arabia was attempting to remove Mr Hariri as prime minister and impose a new leadership on his political movement, he said.

BBC Middle East editor Sebastian Usher says Mr Nasrallah's words were delivered as calmly as ever – but they will inevitably raise the temperature further as a growing number of countries outside the region try to calm the crisis.

There are fears Lebanon could become embroiled in a wider regional confrontation between Saudi Arabia and Iran.

Tensions between the three countries have soared since Mr Hariri announced his resignation.

But US Secretary of State Rex Tillerson warned against Lebanon being used for a proxy conflict, adding that the US strongly backed Lebanon's independence.

US Secretary of State Rex Tillerson said the Saudi foreign minister assured him that Riyadh did not force Saad al-Hariri to resign, and that he had no indication Mr Hariri was being held against his will.

But he encouraged the prime minister to return to Lebanon and clarify the situation so the government could function, expressing concern about how the crisis might affect the stability of the fragile coalition.

His warning against using Lebanon as a proxy battlefield appeared to be aimed primarily at Iran but also Saudi Arabia.

On Riyadh's corruption purge the Secretary of State said he was inclined to believe the crackdown was well intended, but it was still unclear how disruptive it would be.

It took him six days to respond to the extraordinarily volatile situation in the Middle East, renewing criticism that the US lacks a strategy for the crucial region.

It is also a sign that the State Department is not driving foreign policy: President Trump tweets out positions, in this case a very pro-Saudi stance, and Mr Tillerson follows later with a more nuanced approach.