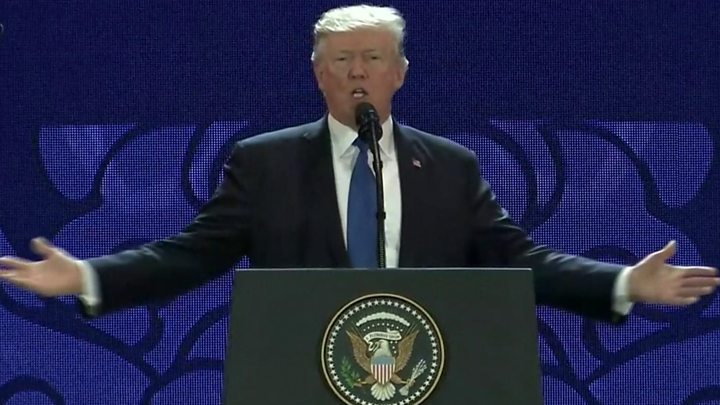 Trump at Apec summit: US will no longer tolerate trade abuses

President Donald Trump has said the US will no longer tolerate "chronic trade abuses", in a defiant address at the Asia-Pacific Economic Co-operation (Apec) summit in Vietnam.

He said he would always put US interests first and Apec nations should "abide by fair reciprocal trade".

Mr Trump is currently on a five-nation Asia tour, with China one of his stops.

Apec brings together 21 economies from the Pacific region – the equivalent of about 60% of the world's GDP.

Since taking office, President Trump has pursued his "America First" agenda and pulled the US out of the regional Trans-Pacific Partnership – a major trade deal with 12 Apec nations – arguing it would hurt US economic interests.

In a speech in the Vietnamese port city of Da Nang on Friday, President Trump railed against the World Trade Organization, which sets global trade laws, and said it "cannot function properly" if all members do not respect the rules.

He complained about trade imbalances, saying the US had lowered market barriers and ended tariffs while other countries had not reciprocated. "Such practices hurt many people in our country," he said, adding that free trade had cost millions of American jobs.

But he did not lay the blame on Apec countries, and instead accused earlier US administrations of not acting earlier to reverse the trend.

He said America would make bilateral agreements with "any Indo-Pacific partner here who abides by fair reciprocal trade", but only "on a basis of mutual respect and mutual benefit".

Mr Trump has repeatedly referred to the region as "Indo-Pacific", a term used to define America's new geopolitical view of Asia.

The US president had travelled to Da Nang from Beijing, where he had also discussed America's huge trade imbalance with China. There too, he said he did not blame the country for "taking advantage".

How did his speech compare to Xi's?

Speaking minutes after his American counterpart, Chinese President Xi Jinping took to the podium to espouse his country's credentials as the new champion of world trade.

Globalisation, he said, was an "irreversible historical trend" but the philosophy behind free trade needed to be repurposed to be "more open, more balanced, more equitable and more beneficial to all".

In contrast to President Trump, the Chinese leader defended multilateral trade deals, which he said helped poorer nations to benefit.

"We should support the multilateral trading regime and practise open regionalism to allow developing members to benefit more from international trade and investment."

America First, or the Chinese Dream?

President Trump was clear – he wants bilateral trade deals and large, multilateral arrangements don't work for him. This was a speech saying that America is open for business, but on America's terms.

Contrast that with China's Xi Jinping, who spoke about the digital economy, quantum science, artificial intelligence – presenting a vision of the future that is connected, and comprehensive.

Increasingly whenever you see Mr Xi on the international stage he is the poster child for free trade and globalisation. Ironic, given that China itself has yet to become a fully free economy.

The US was the architect of many of the multilateral and free trade agreements for Asia. Under its tutelage, many of these countries opened up and reformed – playing by America's rules.

But under Donald Trump, that role has gone into reverse. Which has left China with a gaping hole to fill – and one it is only more than happy to take on.

How are US-China trade relations?

During the US president's visit on Thursday, China announced it would further lower entry barriers in the banking, insurance, and finance sectors, and gradually reduce vehicle tariffs.

Deals worth $250bn (£190bn) were also announced, although it was unclear how much of that figure included past agreements or potential future deals.

After the summit, Mr Trump will pay a state visit to the Vietnamese capital Hanoi, before ending his 12-day Asian tour in the Philippines on 13 November.