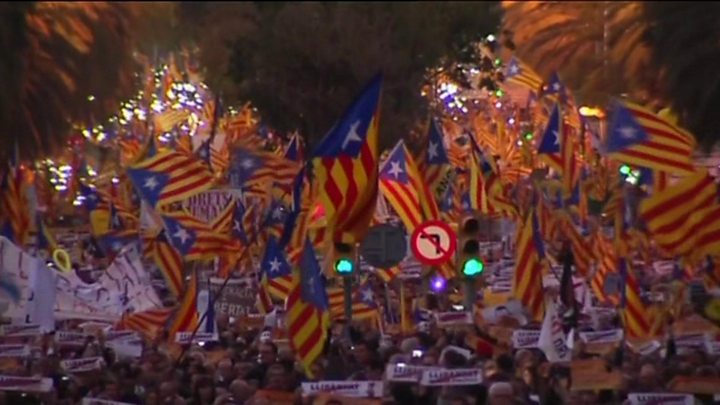 Three-quarters of a million people have rallied in Barcelona to protest against Spain's detention of Catalan independence leaders, police estimate.

They shone phone torches in unison at sunset as calls were made to free eight regional ministers and two grassroots campaign leaders being held on remand.

Some of the detainees will be included on the list of a Catalan separatist party at next month's snap election.

Spanish Prime Minister Mariano Rajoy is to visit the city on Sunday.

In another development, Barcelona's mayoress has condemned pro-independence leaders.

Madrid responded by dissolving the parliament and calling a regional election on 21 December.

A lawyer whose firm represents two of his imprisoned former ministers told BBC News their situation had been made worse by Mr Puigdemont's decision to flee.

The pro-independence movement has proven its ability to mobilise large numbers of demonstrators. Many came to this latest protest from small towns and villages in Catalonia – a sign of the movement's reach.

Their immediate aim is to call for the release of the eight politicians and two activists remanded in custody on charges of sedition and rebellion. The authorities in Madrid insist that the case is purely a matter for the courts, but the detention of politicians and activists does have a political impact. Imprisonment may have served to increase their popularity. It may galvanise the pro-independence movement as the regional election approaches.

The pro-independence camp wants to win a clear parliamentary majority. That would allow their side to have another go at trying to break away from Spain. But the pro-union camp, which represents the other half of Catalan society, will also campaign vigorously.

Protesters marched behind a banner declaring "We are a republic" and carried placards declaring the 10 detainees political prisoners.

The Spanish prime minister is to make his first appearance in Catalonia since implementing direct rule two weeks ago.

He is expected to address a meeting of supporters of his centre-right Popular Party, who firmly want Catalonia to remain a part of Spain.

Ada Colau, who was elected mayoress in 2015 on an anti-capitalist platform and whose party (a merger of left-wing parties) is standing in the regional parliamentary election for the first time, said leaders of the independence movement had "tricked the population for their own interests".

"They've provoked tensions and carried out a unilateral independence declaration which the majority do not want," she told a meeting of her Catalunya en Comú (English: Catalonia in Common) party.