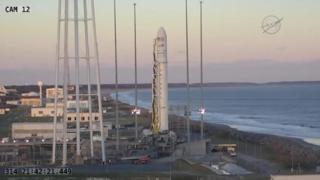 A rocket launch in Virginia was aborted at the last moment when a small aircraft flew into restricted airspace.

The unmanned cargo ship was about to be launched en route to the International Space Station (ISS) when mission control called "abort, abort, abort!".

They had spotted a small aircraft flying in restricted airspace at 500ft (150m) near Wallops Island.

The cargo ship was filled with 7,400 lbs (3,356 kg) of food, supplies, equipment and science experiments for the ISS.

Orbital ATK, which has a $1.9bn (£1.4bn) contract with Nasa to resupply the space station, was sharing live updates before the launch. At first, the preparations were going smoothly.

Range is green and launch team is GO! Just about 10 minutes until launch ????

As the clock ticked down, it looked as if the ISS would soon be receiving an exciting delivery.

Until, suddenly, this happened.

Aircraft in the range.

Orbital ATK said there were "no issues until an aircraft flew into restricted airspace", adding that they would be "ready to go tomorrow morning".