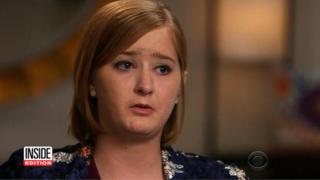 The ex-wife of Texas church gunman Devin Kelley has said he subjected her to abuse and violence, and threatened to kill her and her entire family.

Kelley "had a lot of demons or hatred inside of him", said Tessa Brennaman, 25, in an interview with CBS News.

The former US Air Force airman pleaded guilty in 2013 to hitting, choking and kicking Ms Brennaman, and to fracturing the skull of her young son.

He was sentenced to a year in military prison and demoted over the incident.

In her first interview since Kelley shot and killed 26 people at the First Baptist Church in Sutherland Springs, Texas on 5 November, Ms Brennaman described how he once threatened to kill her for getting a speeding ticket.

Kelley also wounded 20 people in the shooting. Outside the church, he dropped the military-style AR-15 rifle he used in the massacre and drove away from the scene in his truck, pursued by two locals, before shooting himself dead with a handgun.

Kelley had been banned from buying or owning a gun after his domestic violence conviction but his conviction "was not entered into the National Criminal Information Center database", the Air Force revealed in the wake of the shooting.

People with domestic violence convictions are barred from owning firearms, but laws, which vary from state to state, are beset by loopholes and lack of enforcement.

Gun safety campaign group Every Town For Gun Safety found that in 54% of the 156 mass shootings between 2009 and 2016, the victims were current or former intimate partners or other family members.

More than 50 women in the US every month are killed by former partners, according to data compiled by Everytown, and the presence of a gun in a domestic violence situation makes it five times more likely that a woman will be killed.

Devin Kelley's brushes with the law and the military