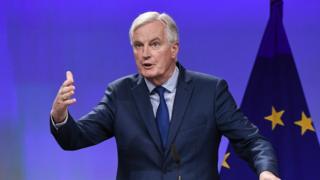 The EU's chief negotiator, Michel Barnier, says he is planning for the possible collapse of Brexit negotiations with the UK.

Failing to reach an agreement was not his preferred option, he stressed.

The UK's Brexit Secretary David Davis has said it is time for both sides "to work to find solutions".

On Friday, Mr Davis insisted good progress was being made across the board, and that the negotiations had narrowed to a "few outstanding, albeit important, issues".

Discussing the likelihood of the talks collapsing, Mr Barnier said: "It's not my option, but it's a possibility. Everyone needs to plan for it, member states and businesses alike. We too are preparing for it technically.

"A failure of the negotiations would have consequences on multiple domains."

Mr Barnier has asked the UK to clarify its stance on its financial obligations to the EU if future trade talks are to go ahead in December.

But Mr Davis has made conflicting remarks, suggesting the UK would not have to give a figure for a financial settlement before it could move on to talks about a future trading relationship.

Speaking to Sky News on Sunday, he said: "In every negotiation, each side tries to control the timetable. The real deadline on this is, of course, December."

Mr Davis was referring to the next EU summit which will take place in Brussels in December.

He said British taxpayers "would not want me to just come along and just give away billions of pounds".

He added: "We've been very, very careful, and it's taking time and we will take our time to get to the right answer."

His comments followed a sixth round of talks between Mr Davis and Mr Barnier in Brussels.

Speaking after the talks on Friday, Mr Davis said any solution for the Irish border could not be at the expense of the constitutional integrity of the UK.

IcetruckNovember 12, 2017
Like story:
tweet
Jeff Sessions sued by 12-year-old with epilepsy seeking to legalize medical marijuana
11 Things You Need To Experience Before You Turn 30