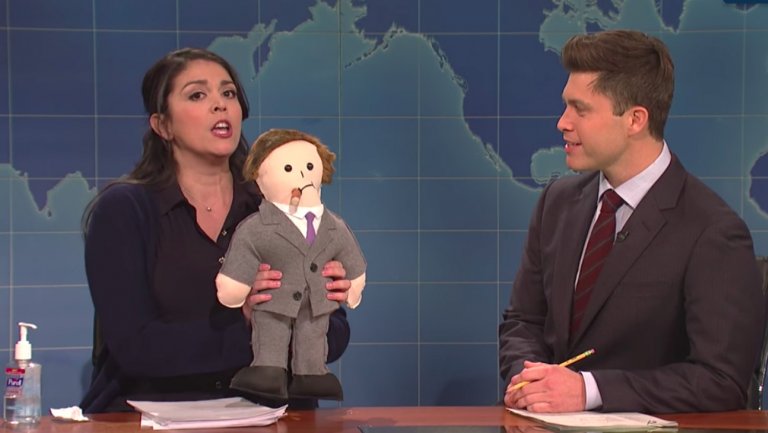 NBC's Saturday Night Live had another Hollywood figure to tackle during its show this week, and this time it was comedian and four-time host Louis C.K.

Saturday night's installment of the late-night sketch series was hosted by actress-comedian Tiffany Haddish, and in her opening monologue, the Girls Trip breakout said she was told she should talk about hot topics. Though Haddish took aim at the sexual harassment and assault allegations that are sweeping Hollywood and other industries alike, she did not mention C.K. by name.

During the cold open, while having a chat with Roy Moore (portrayed by castmember Mikey Day) and the sexual misconduct allegations that have been leveled against the Republican Alabama Senate nominee, Vice President Mike Pence (played by Beck Bennett) dropped in the line, "Even I heard about Louis C.K. and I'm not allowed to watch TV, I'm only allowed to listen to it."

During the Moore-aimed sketch, Kate McKinnon as Jeff Sessions also appeared and, after dismissing Moore in seeming disappointment, said: "There's so many men out there acting like monsters — Weinstein, Kevin Spacey, (cough) the president. Has this been happening forever? Have I both fostered and benefited from a culture of systemic oppression?," then quickly decided, "No? Well, that's a relief!"

But it was "Weekend Update" that held its gaze on C.K. and the current climate the longest.

Co-host Colin Jost began by telling New Yorkers the brutally cold weather and the fact that "everyone you've ever heard of is a sex monster" are two good reasons to stay indoors. The comment came with a graphic of C.K., Spacey, Weinstein and Moore.

The weekly segment then welcomed a new character, "Claire from HR," an overwhelmed NBC executive (played by Cecily Strong) who has been working nonstop given the current climate. Sharing questions from her annual sexual harassment guidelines seminar, Claire quizzed Jost on how to best handle workplace relationships and consent.

In a thinly veiled reference to C.K., Strong's Claire offered three choices, with only one right answer, of how to handle office romances: Inform someone at HR, "Lock her in a room and make her look at it" or "Bully her out of the entire industry."

When asking Jost the "new question" she has to do now, she gave options for "when it is okay for an adult to have a sexual relationship with a 14-year-old." Taking aim at both Moore and Spacey, she asked if it's okay "when she's 14, but smoking a cigarette," "14, but it's Alabama" and "14, but you're gay now so, hooray, how brave."

After agreeing with Jost that it's such an easy question, she said she didn't understand why it had to be on the quiz and squirted Purell hand sanitizer into her mouth. She also used a prop doll to demonstrate where "your penis should be" at work (answer: never out of your pants).

"I'm sure I'll be back next week and the week after that forever and ever because all of this isn't just a scandal, it didn't just start last week — it's just actual reality for half of the population," she closed while reading a mobile alert and exclaiming, "George Takei, no!"