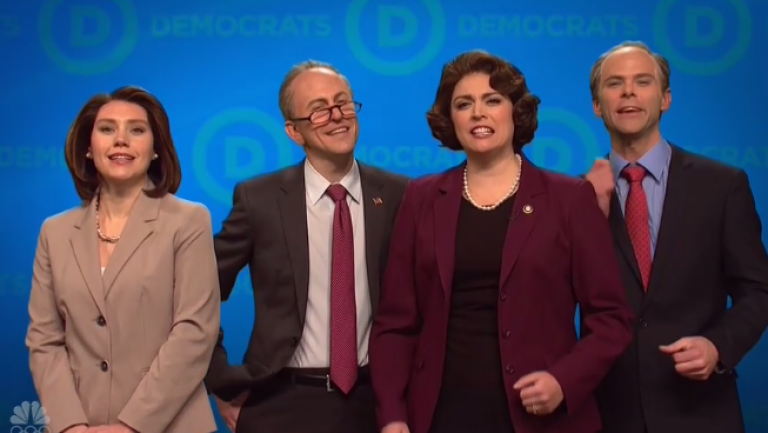 'SNL' Has Special Message From DNC: "We're Back"

The show poked fun at the Democratic party following their victories in Virginia and New Jersey earlier this week.

NBC's Saturday Night Live poked fun at the Democratic National Committee with a fake ad stating, "We're back!" following Democrats winning a number of governors races in Virginia and New Jersey this week.

Strong's Feinstein went on to express the need to secure jobs. “Jobs like smuggling immigrants across the border,” she said.

The fake ad then introduced "fresh new faces" to the party: former SNL castmember Jason Sudeikis as Joe Biden, Larry David as Bernie Sanders and McKinnon as Hillary Clinton. McKinnon also later showed up as “Not Hillary,” which was her in the same Clinton outfit and wig, but with a fake mustache.

"We're really going to lace into people if they don't say what's politically correct, like these comics out there that think it's okay to make jokes about concentration camps. That guy should rot in hell," said David's Sanders, alluding to the comic actor's own controversial monologue last week hosting SNL.