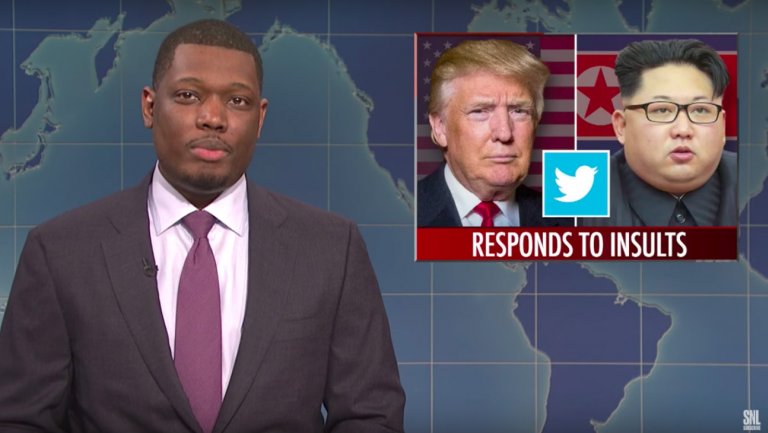 But the "Weekend Update" host admitted that, this time, the president's "short and fat" tweet was "pretty damn funny."

Only hours ahead of Saturday's show, President Donald Trump took aim at Kim Jong Un in a tweet, saying he would never call the North Korean dictator "short and fat." The post came in response to the country's foreign ministry calling Trump "an old lunatic" over his speech in South Korea.

"A lot of times, Donald Trump goes way over the line with his tweets, but this time — that was pretty damn funny," said Che. "I mean, look at how vain and catty he is. They're like, 'You lunatic old man,' and he's like, 'Old?'"

Che then referred to Trump, 71, as "President Miss Thang" when referencing his response to last week's mass shooting in Texas.

In an effort to rally global pressure against North Korea's nuclear weapons program, Trump had said during his speech in South Korea on Tuesday, "Do not underestimate us. And do not try us. … The weapons you're acquiring are not making you safer, they are putting your regime in grave danger. Every step you take down this dark path increases the peril you face."

North Korea's foreign ministry said of the comments, "Reckless remarks by an old lunatic like Trump will never scare us or stop our advance."