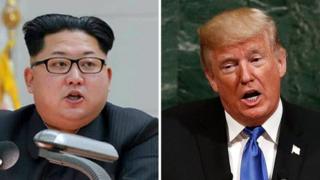 US President Donald Trump has offered Asia his services as a mediator, shortly after tweeting insults.

At the start of a meeting in Hanoi with the Vietnamese president, Mr Trump said he could help arbitrate the regional South China Sea dispute, which includes Vietnam and China.

"I'm a very good mediator and arbitrator," he said.

It came shortly after he called North Korea's Kim Jong-un "short and fat" on Twitter.

China, Vietnam, the Philippines, Taiwan, Malaysia and Brunei all have competing claims to territory in the South China Sea.

"If I can help mediate or arbitrate, please let me know," Mr Trump told his Vietnamese counterpart, Tran Dai Quang.

Ahead of the Hanoi meeting, Mr Trump had fired off a series of angry tweets about his war of words with Kim Jong-un and his relationship with Russian leader Vladimir Putin.

On Saturday, North Korea denounced Mr Trump's Asia trip, calling it a "warmonger's visit" and again described the president as a "dotard" – a centuries-old insult for an elderly person.

Mr Trump responded by suggesting in a tweet that Mr Kim was "short and fat", and complaining: "Oh well, I try so hard to be his friend – and maybe someday that will happen!"

The president also tweeted out a short tirade over criticism of his handling of Vladimir Putin. Mr Trump told reporters on Saturday that he trusted the Russian leader's word that Russia had not attempted to interfere with the US election, despite a consensus among US intelligence agencies to the contrary.

"When will all the haters and fools out there realize that having a good relationship with Russia is a good thing, not a bad thing," the president wrote.

"There [sic] always playing politics – bad for our country. I want to solve North Korea, Syria, Ukraine, terrorism, and Russia can greatly help!" he added.

"What he believes, he believes," he added, of Mr Putin's belief that Russia did not meddle.

When will all the haters and fools out there realize that having a good relationship with Russia is a good thing, not a bad thing. There always playing politics – bad for our country. I want to solve North Korea, Syria, Ukraine, terrorism, and Russia can greatly help!

Does the Fake News Media remember when Crooked Hillary Clinton, as Secretary of State, was begging Russia to be our friend with the misspelled reset button? Obama tried also, but he had zero chemistry with Putin.

Asked at a news conference in Vietnam if he could see himself being friends with Mr Kim, the president said: "That might be a strange thing to happen but it's a possibility.

"If it did happen it could be a good thing I can tell you for North Korea, but it could also be good for a lot of other places and be good for the rest the world.

"It could be something that could happen. I don't know if it will but it would be very, very nice."

The Vietnamese leg of Mr Trump's five-nation Asia tour was met with protests. Mai Khoi, a singer and dissident, said police confined her to her home and threatened her with eviction, after she defied a ban on protests.

Ms Khoi, who was barred from standing for parliament last year, said she was escorted home after she flashed a sign insulting the president as his motorcade passed by.

She said she was protesting against Donald Trump's attitude to women and his failure to meet with human rights activists in Vietnam.

Mr Trump will travel to Manila later on Sunday for the final stop on his Asia tour, before flying back to the US.