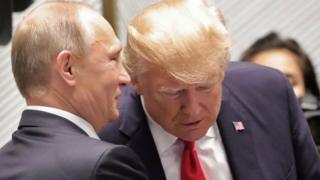 Trump Russia: US 'in peril over president's stance'

Two former US intelligence chiefs say Donald Trump's stance on Russian meddling in last year's presidential election is putting the US at risk.

The US president sparked uproar by suggesting he believed Russian counterpart Vladimir Putin when he said there had been no interference.

The two leaders briefly discussed the allegations at an Asia-Pacific summit.

US intelligence has long concluded Russia tried to sway the vote in Mr Trump's favour.

"Every time he [Putin] sees me he says I didn't do that, and I really believe that when he tells me that, he means it," Mr Trump told reporters.

"I think he is very insulted by it, which is not a good thing for our country."

Mr Trump has since sought to mollify critics of his comments following uproar at his apparent defence of Mr Putin.

Ex-intelligence chiefs go on the attack

Mr Clapper said he was alarmed by the president's comments.

"Putin is committed to undermining our system, our democracy and our whole process," he told CNN.

"To try to paint it in any other way is, I think, astounding and in fact poses a peril to this country."

Appearing alongside him, Mr Brennan, said he found it "puzzling" why Mr Trump was not more explicit in condemning the Russian president when it represented a "national security problem".

Referring to Mr Trumps criticism of him, Mr Brennan said: "Considering the source of the criticism, I consider that criticism a badge of honour."

Soon after, Treasury Secretary Steven Mnuchin rejected suggestions from both men that Mr Trump was being "played", saying he was focused on tackling difficult issues like North Korea and Syria.

Why the row matters

Special counsel Robert Mueller is currently investigating whether there were any links between Russia and the Trump campaign. Both deny there was any collusion.

Last month, former Trump campaign adviser George Papadopoulos pleaded guilty to having lied to the FBI about the timing of meetings with alleged go-betweens for Russia.