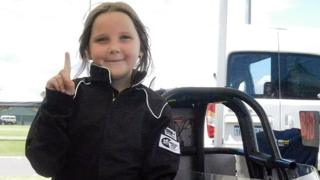 An eight-year-old girl has died after crashing her junior drag racing car on a track in Western Australia.

Anita Board was on a solo "test run" when her vehicle hit a concrete barrier at the Perth Motorplex, police said.

Paramedics treated her at the scene on Saturday before taking her to hospital, where she died a day later.

The girl had been attempting to gain her licence for junior dragster racing, the Australia National Drag Racing Association (Andra) said.

She had just turned eight – the minimum age required to race under official rules – and was driving a 210cc dragster, local media reported.

As a result of the accident, Western Australia has now suspended junior racing at the Perth Motorplex, the state's only drag racing arena.

A statement from Sport and Recreation Minister Mick Murray said: "The suspension of this category of motorsport activity allows for a full investigation to be carried out into the nature of the accident.

"The State Government will wait until the details of the accident are clear following the investigation before taking any further action".

Mr Murray told reporters that he was unaware that children as young as Anita Board could take part in drag racing.

"I was very surprised… but in saying that, from my understanding, it was well controlled but an unfortunate accident," he said.

The girl's father, Ian Board, posted a message online saying "my heart [is] in a million pieces".

"We will need … the love and support in the days weeks months ahead," he wrote in local community forum.

Members of the drag racing community have posted tributes online, including under the hashtag #HelmetsOutForAnita.

Andra said in a statement: "Anita was undergoing a licensing pass at the Perth Motorplex, as part of the process for her to receive her racing licence, when this tragic accident happened.

"Junior racers must adhere to stringent safety rules and regulations regarding safety equipment, and their dragsters must meet specific safety requirements. ANDRA regulations for junior competition are benchmarked against similar organisations internationally."

Police said they would prepare a report for a coroner.