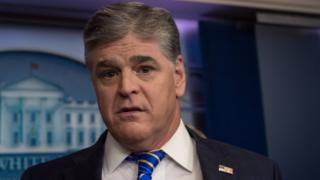 US conservatives are destroying their Keurig coffee machines after the company announced it would stop advertising on a Fox News programme.

Keurig is among five firms that said they would pull ads from The Sean Hannity Show after the host was accused of going easy on an alleged abuser.

The Fox News host defended Mr Moore and cast doubt on the allegations.

Mr Moore, a former Alabama Supreme Court judge, has denied the claims against him.

The conservative firebrand has threatened to sue the Washington Post, which last week published accounts from three women who alleged encounters with Mr Moore decades ago when they were teenagers and he was in this 30s.

On Monday, Senate leader Mitch McConnell became the latest top Republican to say he believes Mr Moore's accusers, calling on him to step aside for next month's election.

But Mr Hannity argued that Mr Moore "deserves the presumption of innocence". He invited him on his radio show to defend himself and his campaign.

On his radio show on Thursday, Mr Hannity seemed to play down the women's allegations.

He said: "There was no sexual, there was kissing involved, and then they're saying this one encounter with a 14-year-old…"

"And it was consensual," his programme producer interjected.

"And consensual, that's true," Hannity responded. "And there's, I just, I don't know how you find out the truth."

Social media users attacked Hannity, pointing out the accusers would not been old enough to provide legal consent.

As an outcry mounted over the interview, Keurig said it would pull its Fox News ad.

Conservatives vented their displeasure by taking to social media to smash their instant coffee machines.

"Liberals are offended by this video of a Keurig being thrown off of a building. Please retweet to offend a Liberal" one user posted.

Mr Hannity retweeted videos of the destructions, and promised to give away 500 coffee makers.

Others made fun of conservatives for destroying their expensive appliances.

Four other companies said they would stop running their ads on the Fox show , without explaining their decision.

They are realtor.com, a real estate website; Eloquii, a plus-size women's clothing company; 23 and Me, a DNA genetic testing company; and Nature's Bounty, a vitamin manufacturer.

On Hannity's Friday show, Mr Moore declined to rule out that the possibility that he had dated girls in their late teens when he was in his 30s.

"If I did, I'm not going to dispute these things," he said, "but I don't remember anything like that."