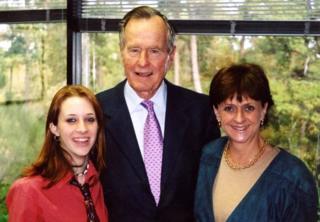 A woman has said she was 16 when former US President George HW Bush groped her buttocks as she posed for a photo with him and her mother.

Rosyln Corrigan is the sixth woman to accuse Mr Bush of inappropriately touching her in similar circumstances.

She told Time Magazine she met Mr Bush at a 2003 meeting of CIA officers in Texas, where her father worked.

"My initial reaction was absolute horror," she said about the incident. "I was really, really confused."

"I was a child," Ms Corrigan added.

A Bush spokesman has previously acknowledged he has touched several women on the rear.

On Monday, Jim McGrath, a spokesman for Mr Bush, told the BBC the 41st president, who once directed the CIA, "simply does not have it in his heart to knowingly cause anyone harm or distress, and he again apologises to anyone he may have offended during a photo op".

Ms Corrigan said the incident occurred as Mr Bush was posing for a photo with her and her mother at the CIA office in The Woodlands, Texas, in November 2003.

"As soon as the picture was being snapped on the one-two-three he dropped his hands from my waist down to my buttocks and gave it a nice, ripe squeeze, which would account for the fact that in the photograph my mouth is hanging wide open," Ms Corrigan said.

Mr Bush was 79 years old at the time.

"I was like, 'Oh my goodness, what just happened?'" Ms Corrigan said in an interview with Time.

"I didn't say anything. What does a teenager say to the ex-president of the United States? Like, 'Hey dude, you shouldn't have touched me like that?'"

In late October, after several other women came forward with similar stories, Mr McGrath said that Mr Bush "on occasion, has patted women's rears in what he intended to be a good-natured manner".

He added that due to the former president's use of a wheel chair, "his arms fall on the lower waist of people with whom he takes pictures".

But Mr Bush is standing up in the photos alongside Ms Corrigan, which she said bothers her because she believes the "excuse for his senile, old man antics… is not true".

"When I heard that was the reason, like, 'Oh, he's just an old man and he doesn't know any better and he's just being harmless and playful and it's just where his arm falls… I just burst into uncontrollable sobbing," she said.

More on this story