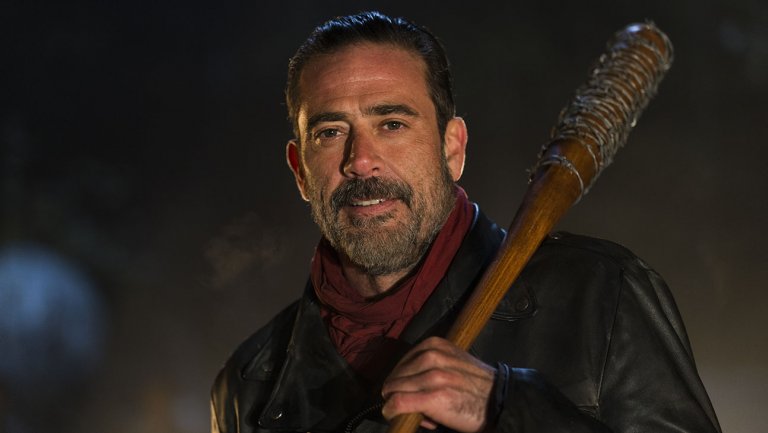 "I like to help people through their weaknesses," Jeffrey Dean Morgan's smirking Savior hisses in a new look at the next 'Walking Dead.'

"A priest, a dictator and a barbed-wired baseball bat named Lucille walk into a bar…"

One can imagine Negan (Jeffrey Dean Morgan) making some version of that exact joke in the next episode of The Walking Dead, based on the preview for the fifth installment of season eight, called "The Big Scary U." A sneak preview of the episode shines the spotlight on the King of the Saviors, currently on lockdown on the outskirts of the Sanctuary, surrounded by a horde of flesh-hungry walkers. And he's not alone: Negan holds Lucille close by, of course, but he also has Seth Gilliam's Father Gabriel for company — and the ensuing conversation is about what you would expect from Negan and the reformed priest's first meaningful interaction.

Watch the two men meet and trade stories in the clip below:

Will episode five finally pull the curtain back on Negan and turn him into something resembling a sympathetic figure? It's a tall order for the man who brutally murdered Glenn (Steven Yeun) and Abraham (Michael Cudlitz), so full rehabilitation feels like it's out of the question. But episode five looks poised to seize on an opportunity born from a compelling character dynamic: Negan and Gabriel, sinner and priest, their backs against the wall, perhaps for the last time. The stage is very much set for Negan to spill his guts, as it were, offloading his backstory onto a man whose profession demands he listens carefully and empathetically.

However the Negan and Gabriel situation resolves, it won't be the only story at play in episode five. In the full trailer for "The Big Scary U," we see at least two other stories running alongside one another: Rick (Andrew Lincoln) and Daryl (Norman Reedus) riding deeper into their current mission, while the rest of the Saviors try to figure out their next steps from their Neganless position. It looks like Simon (Steven Ogg) is locked in on outing a mole within the Saviors' leadership, which could spell trouble for the likeliest suspect, Eugene (Josh McDermitt), even if viewers know all too well that Dwight (Austin Amelio) is the man on the inside.

Watch the preview for "The Big Scary U" below: