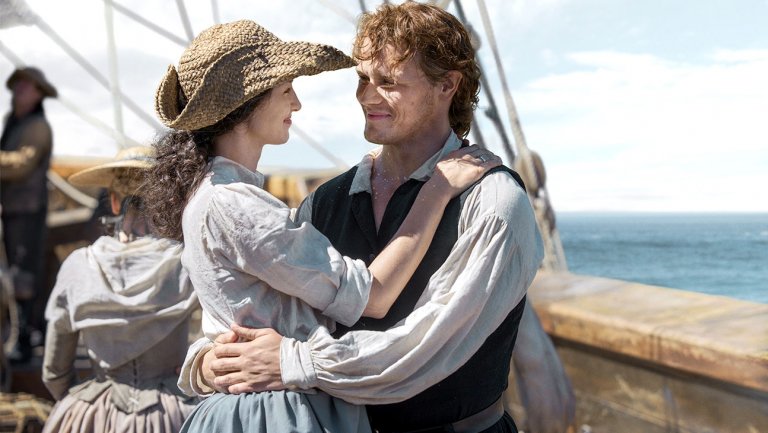 'Outlander' Sets Sail and Brings Drama on the High Seas

Executive producer Matt B. Roberts talks with THR about the key missing scene from the book in "The Doldrums."

[Warning: This story contains spoilers from Sunday's episode of Outlander, "The Doldrums."]

During "The Doldrums," Jamie and Claire learned that life at sea was equally as dangerous as their time on land. With a crew near mutiny after being stuck at sea, another ship — ravaged by disease — took Claire away from Jamie after she helped eradicate the typhoid that nearly wiped out its crew. The episode ended with a shot of Claire, panicked and helpless, as she was taken further from Jamie — and despite the fact that both ships were sailing for Jamaica.

The Hollywood Reporter spoke with Outlander executive producer Matt B. Roberts about what this latest split means for Jamie and Claire and why a certain fan-favorite character was left out of this episode.

The show is now out at sea, signaling a shift from Voyager's source material. For those who haven't read the book, now that Claire's been taken by this new ship, where does the story go from here?

The next episode is aboard this plague ship, the HMS Porpoise, as Claire has been taken hostage to care for the sailors. What we do there is we go back to the Artemis as Jamie is struggling to try to find a way to force the captain to follow the Porpoise, and he is actually imprisoned on the Artemis by Captain Raines.

Jamie's experience while Claire is on the Porpoise isn't told in the book. Why did you decide to tell that story?

When we start breaking stories, we always start by discussing what point of view and what perspective we're going to tell it from. As the season has gone along, you see some episodes are more heavy with Jamie stories, and the next episode is a heavier Claire story. This is one of those stories in the next episode, as it's a little heavier with the Claire story, but we still wanted to go back and tell Jamie's as well since the book just tells Claire's story. We wanted to show what Jamie was going through at the same time. We jump back to the Artemis and we created this story of how he gets imprisoned, what he does to try to get himself free so he can find his wife again. When he gets to this point of the story, he's waited 20 years to have her back and he doesn't want to lose her right off the bat. She gets taken by someone on what he thought was a deal where she was just supposed to go over, check patients and come back. But actually Captain Raines made a deal with Captain Leonard of the Porpoise and he knew all about the deal, and Jamie wasn't a party to it. They didn't even ask Jamie, and that's why he was so upset about it.

Mr. Willoughby's (Gary Young) performance of his life story for the Artemis crew plays out differently than it does in the book. Why the change?

We adjusted the story where Mr. Willoughby has to unveil his story sooner than he really wanted to. He had to distract the sailors who were out for Hayes' blood for being a Jonah, and he ended up saving his friend.

He knew the weather was about to change because he saw the pelican flying low. In the book, he jumps into the water to catch it. Will the story of him capturing and training his pelican friend Ping An be told?

Unfortunately, no. We looked into it. But finding a trained pelican is not easy. [Laughs] We definitely looked. We looked into the practical, finding a pelican, training it and having it work with the actor. We couldn't find one when we were down in South Africa. We looked into visual effects and we just didn't have the time to add in all the ships and a pelican. These are the hard choices we have to make: did we want to have Jamie and Claire on a ship, or did we want to do a pelican? We have to tell the Jamie and Claire story before we can tell the Mr. Willoughby's pelican story. We're doing two full episodes in a row on ships and that entails a lot of green screen on a back lot in South Africa and everything you see is visual effects: all the water, all the movement. We spend a lot of time on those little details.

Fergus (Cesar Domboy) revealed that the woman he's been courting is Jamie's step-daughter Marsali (Lauren Lyle). Now that Marsali has stowed away on the ship and Jamie is making her room with Claire in such close quarters despite how they feel about each other, what are you most excited for fans to see from that dynamic?

They're both feisty and they have such a great dynamic. We knew that putting them in scenes together was going to be fun to watch. Going forward, we build a relationship there where there is fire and passion for both characters. In a way, they're both right, and that's what makes a dynamic scene. There's going to be sparks and fire.

From a creative standpoint, what was the most challenging thing about taking Outlander to sea?

Being stuck on ships for two episodes, visually it's tough. You're below decks, it's dark, it's dank, there's vomit — our fake vomit actually smelled worse than real vomit, I don't know what they put in there but it was really horrid. We were in one location for a very long time, so we had to keep it fresh and keep the story moving. We couldn't let it get stale in these environments that were very stale. David Moore directed both of these episodes and did a great job keeping the camera moving and getting them up on decks with fresh air and down in the holds in the darkness. It's like 12 Angry Men where you're in a jury room for the entire movie but you're moving around and changing the angles to keep it exciting. That helps out and keeps it fresh, especially when there's so much death going on in the next episode.

What are you most excited for viewers to see from the next episode?

There's something very sweet and special about the relationship between Claire and Elias Pound [Albie Marber]. Claire essentially had to give up her own child to go back and be with Jamie, and in this moment, because she hasn't quite bonded with Marsali yet, she does become a mother figure to Elias Pound. To me, it's a really sweet and special arc.