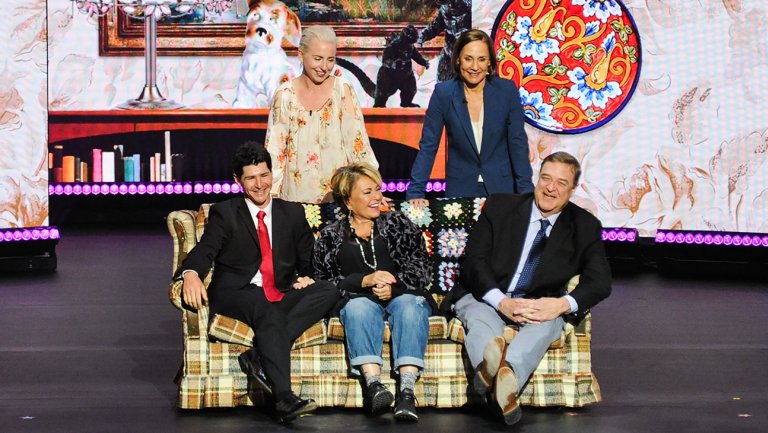 The network has given an additional episode order to the family sitcom ahead of its highly anticipated return.

ABC is feeling good about its upcoming Roseanne revival.

The network has ordered an additional episode ahead of the Roseanne Barr sitcom's highly anticipated return, The Hollywood Reporter has confirmed. That brings the episode total of the reboot to nine episodes.

Set to bow sometime in 2018, the new episodes will see the return of original stars Barr (Roseanne), John Goodman (Dan), Laurie Metcalf (Jackie), Sara Gilbert (Darlene), Michael Fishman (DJ), Lecy Goranson (Becky) and even Sarah Chalke, who played the second Becky and will return to the series in a different role.

Roseanne is the latest series at ABC to get the green light for additional episodes. In recent weeks, the network has ordered more episodes of long-running drama Grey's Anatomy, as well as comedies Black-ish, American Housewife and The Middle. On Friday, ABC also ordered three more episode of freshman light drama Kevin (Probably) Saves the World.

Although the new episodes have yet to premiere, the decision to invest in more Roseanne is not surprising given the anticipation surrounding the show's return. Roseanne originally ran from 1988-1997. NBC made a similar move when it extended its Will & Grace revival order to 16 episodes, including a holiday special, and also renewed the multicamera effort for a second 13-episode season all more than a month before the show returned.

ABC officially announced the Roseanne revival in May, and used its Upfront presentation to tout the cast reunion, bringing several members of the show's ensemble onstage.