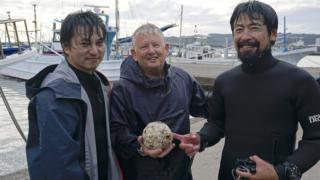 A team of underwater archaeologists believe they have found a cannonball from a Spanish ship that sank in a storm off Japan in 1609.

The San Francisco was travelling from the Philippines to Mexico when it sank.

The galleon was believed to be carrying valuable trade goods which could be worth millions today, researchers say.

Its location has been a mystery – but the suspected cannonball, thought to be the first artefact ever found from the ship, offers clues about where it sank.

Dr Jun Kimura from Tokai University has been leading a team of maritime archaeologists, who have been searching for the San Francisco in waters off Iwawada in Chiba prefecture.

The cannonball was discovered by Ian McCann, an Australian researcher at the University of New England, during a deep dive nearly 40m (131 ft) below the surface.

"We were in dark, murky waters," Dr Kimura told the BBC. "Ian just saw an unusual shape on the sandy bed – he recovered it but then we had to go back to the surface as our air had nearly run out."

He said the team, and archaeological experts they had consulted, were "almost certain" it was a cannonball from the San Francisco, as it was similar to cannonballs found in other Spanish trading ships in the Philippines. However, they will be carrying out a chemical analysis to confirm this.

Mr McCann told the BBC: "A cannonball may not sound like much but it indicates the general vicinity where the vessel went down.

"It is the only Spanish Manila galleon that has not been plundered by treasure hunters," he added, and the trading vessels "carried fabulously valuable cargo… by today's value the cargo may have had a value of around $80m".

Mr McCann made the discovery earlier this month – and the find was revealed in Japanese media late last week.

The project, which is funded by the Japanese government, is the first scientific mission to search for the San Francisco shipwreck.

Researchers also found a piece of timber underwater, which they believe is related to the shipwreck. They plan to conduct further expeditions in the area in early 2018.

The San Francisco shipwreck was of "historical importance", because it "impacted the relationship between Spain, the Philippines, Mexico and Japan," Dr Kimura said.

The vessel had been transporting goods from the Philippines to Mexico – both were Spanish colonies at the time. Among its passengers was the governor of the Philippines Don Rodrigo de Vivero Velasco.

On 30 September 1609, a storm drove the boat into reefs off Chiba province.

According to experts, Mr Velasco, who survived the sinking, detailed the incident in a book, writing: "The ship was getting destroyed in pieces among some cliffs on the head of Japan… all of us survivors were over the riggings and ropes, because the galleon was getting broken piece by piece."

Hundreds of people survived the shipwreck, and, thanks to Mr Velasco's good relations with the Japanese, were treated well.

Eventually, they successfully sailed back to Mexico, with a number of Japanese representatives, on the first western-style ship ever built in Japan.

"They were the first Japanese ever to cross the pacific," Dr Kimura said. "The Spanish king highly appreciated what Japan had done for the survivors, so diplomatic exchanges between Japan and Spain started."

Reporting by the BBC's Helier Cheung.