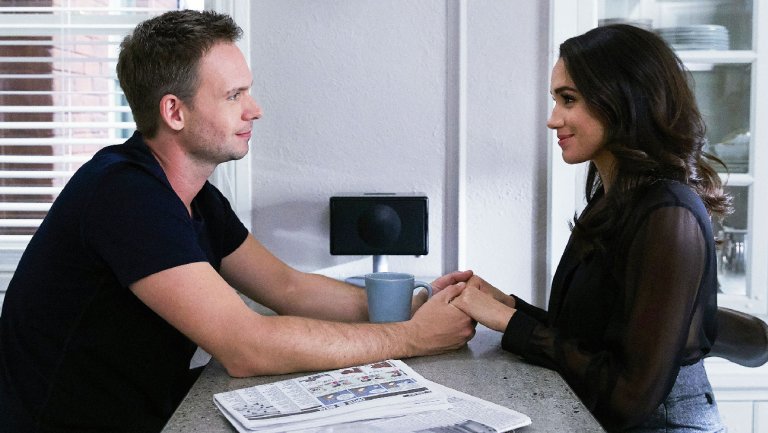 The drama is the longest-running show on USA Network and its second-highest-rated overall.

Some very big changes are coming for USA Network's Suits.

Sources tell The Hollywood Reporter that the NBCUniversal-owned cable network is close to a deal to renew its "Blue Skies" procedural for an eighth season as stars Patrick J. Adams and Meghan Markle plot their exit from the Aaron Korsh-created series.

Adams has been with the series for all seven seasons and recently started directing episodes of the legal procedural, the last remaining drama from USA Network's "Blue Skies" brand (before the cabler went darker after the success of Mr. Robot). Adams earned a SAG Award nomination for his role as likeable bad-boy lawyer Mike Ross. Sources note he is looking to pursue other creative avenues beyond Suits. The actor has been in contract talks for months but now appears poised to exit. Sources note that should Adams indeed exit Suits as a series regular, the door will remain open for him to potentially return in season eight in a guest or recurring capacity (as well as potentially directing). Suits did the same with Gina Torres, who left the show midway through season six but returned for that season's finale and is returning for the season seven finale — which is being eyed as a potential spinoff revolving around the actress' Jessica Pearson character.

Markle co-stars as Rachel Zane, a paralegal-turned-lawyer at the show's law firm who is engaged to marry Mike. Speculation about Adams and Markle's exits resurfaced over the weekend as the duo were spotted on the show's Toronto set filming a wedding scene. Speculation that Markle, an avid philanthropist who also has been with Suits since its start, could exitthe series began almost immediately after she started dating Prince Harry in 2016. Her departure opens the door for a potential royal wedding, which has been wildly speculated since the actress met Queen Elizabeth.

For its part, Suits ranks as USA Network's second-highest-rated scripted series (behind only the yet-to-be renewed Jessica Biel anthology The Sinner.) The drama, produced in-house at Universal Cable Productions, now seems poised to further lean into Gabriel Macht's Harvey Specter, who has been the focal point for the show since its start.

Creator/showrunner Korsh, meanwhile, has spoken openly about his long-term goal for Suits. "I originally thought Suits could possibly go seven or eight seasons. But I wouldn't limit it now, not when I see shows like Grey's Anatomy lasting much longer. There are stories left to tell," he told THR for a feature pegged to the drama's 100th episode.

Korsh is currently readying the Suits spinoff with Torres. The pilot will air as a planted episode in Suits' currently season seven and is slated to be the finale that will air in the first quarter of 2018. The installment will reunite Harvey (Macht), Mike (Adams), Louis Litt (Rick Hoffman), Donna Paulsen (Sarah Rafferty) and Rachel (Markle) with their old friend Jessica (Torres) as she adjusts to her new life in Chicago. When Jessica is forced to enter the dirty world of Chicago politics, she must rely on her legal wits and valiant relationships from Pearson Specter Litt to navigate this unknown territory.

IcetruckNovember 13, 2017
Like story:
tweet
Roy Moore: Woman claims US Senate candidate ‘tried to rape me’
‘Curb Your Enthusiasm’ Boss on Why Larry David Is Ready for a New Love Interest