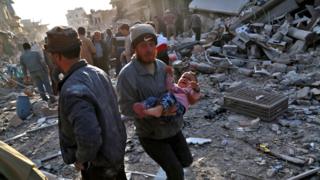 Dozens of civilians are reported to have been killed in an air strike on a rebel-held town in northern Syria.

The Syria Civil Defence, whose rescue workers are also known as the White Helmets, said a raid on Atareb had left 43 people dead, among them children.

The UK-based Syrian Observatory for Human Rights reported that the town's market was hit and that 29 were killed.

It is not clear whether the strike was carried out by Syrian government warplanes or those of its ally Russia.

But the town is located in an area of Aleppo province that is part of a "de-escalation zone" established earlier this year by Russia, Iran and rebel-backer Turkey.

The Syrian Observatory, which monitors the country's civil war through a network of sources on the ground, said Atareb's market place was hit three times on Monday, and that five children and three women were among those killed.

A journalist for the pro-opposition news website Zaman Al Wasl, Ahmed Primo, tweeted that three Russian warplanes had fired missiles at the market. The entire market, which contained more than 100 shops, was destroyed, he said.

Photographs published by AFP news agency showed the aftermath of the attack, including the bodies of three young children laid out in a street, partly covered by plastic sheets and a sack.

Other images showed rescue workers pulling victims and survivors from the rubble of destroyed buildings.

Atareb is home to tens of thousands of Syrians who have been displaced by fighting that is believed to have left at least 400,000 people dead since 2011.