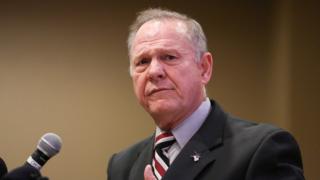 US Senate Republican leader Mitch McConnell has called on his party's Alabama candidate to "step aside" amid claims he abused a 14-year-old girl.

Another woman is expected to come forward on Monday to accuse Mr Moore of assaulting her when she was a child.

Mr Moore's wife has said her husband's accusers are being paid.

Mr McConnell told reporters in his home state of Kentucky on Monday that party officials were considering whether another Republican could challenge Mr Moore in next month's election, through a so-called write-in challenge.

He said Luther Strange, whom Mr Moore beat in the Republican primary earlier this year, was a possible option.

No matter what happens between now and the 12 December election, Mr Moore's name will remain on the voters' ballot, the Alabama secretary of state has confirmed.

Alabama law prohibits the replacement of a party candidate up to 76 days before the election.

However, voters are free to "write-in" any name they choose and the party might encourage support for another Republican candidate.

The state Republican party could also disqualify Mr Moore's nomination, meaning that if he won the most votes he would still not be declared the winner.

Failing that, if Mr Moore won the election, the US Senate could vote to expel him by arguing that he lacked fitness to serve.

Last week's Washington Post story quoted four women by name, including one who alleged Mr Moore initiated sexual contact with her when she was 14 – beneath the legal age of consent in Alabama – while he was a prosecutor in his 30s.

Mr McConnell previously said Mr Moore should step aside only if the allegations were proven true.

But on Monday he said flatly: "I believe the women. Yes."

Mr Moore hit back in a tweet: "The person who should step aside is @SenateMajLdr Mitch McConnell. He has failed conservatives and must be replaced. #DrainTheSwamp".

The person who should step aside is @SenateMajLdr Mitch McConnell. He has failed conservatives and must be replaced. #DrainTheSwamp

He sent out a fundraising email with the subject line: "Mitch McConnell's plot to destroy me."

But an opinion poll after the allegations surfaced suggested the race was tightening. Alabama has not elected a Democratic senator in a quarter of a century.

On Monday, celebrity lawyer Gloria Allred said she would hold a press conference in New York to unveil another accuser of Mr Moore.

"The new accuser wishes to state what she alleges Roy Moore did to her without her consent," Ms Allred said in a statement.

Mr Moore has said the Washington Post story is a fabricated smear by his political opponents.

"This article is a prime example of fake news," the 70-year-old said on Saturday in Alabama.

But in an interview on Friday with conservative radio host Sean Hannity he did not wholly rule out having dated teenage girls when he was in his early 30s.

His wife, Kayla Moore, wrote on Facebook on Monday: "They've been on a witchhunt here in Etowah County.

"We are gathering evidence of money being paid to people who would come forward.

"Washington establishment and Democrat Party will stop at nothing to stop our campaign."