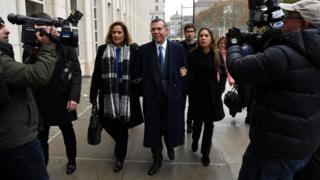 The trial has begun in New York of three former South American football officials accused of corruption as part of a major US inquiry.

They have pleaded not guilty.

The former officials have been accused of taking millions of dollars in bribes in exchange for granting contracts for top South American tournaments.

US Assistant Attorney Keith Edelman told jurors the evidence will show abuse over 20 years, as the men took money meant to promote the sport.

Prosecutors say the they received bribes from marketing companies to grant them rights over the region's most prestigious competitions, including the Copa America.

Mr Napout, from Paraguay, was the president of South America's football governing body Conmebol, as well as heading the national football federation in his country. Mr Burga is former president of Peru's soccer federation.

Defence attorneys say that the government's case relies heavily on testimony from disgraced football officials who falsely accused the men in order to receive lighter sentences in their own criminal cases.

The trial is expected to last five weeks as prosecutors call dozens of witnesses to testify and present 350,000 pages of evidence.

Last month, a former Guatemalan judge who led his country's football federation has become the first person to be sentenced.

Hector Trujillo was sentenced to eight months in prison after pleading guilty to wire fraud and conspiracy.

IcetruckNovember 14, 2017
Like story:
tweet
Trump in Asia: Trade rules ‘have changed’ under his watch
Ohio ready to move sick inmate ahead of execution