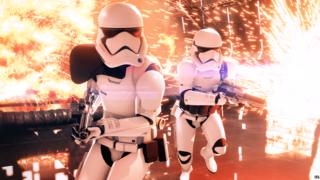 Games publisher EA has changed a rule in its Star Wars Battlefront II video game after a huge backlash.

During the game, players have to obtain credits – either by buying them or through long hours of game play – to unlock popular characters including Luke Skywalker and Darth Vader.

Many players said it was unfair as the gaming required worked out at around 40 hours per character, unless they paid.

EA says the number of credits required will now be reduced by 75%.

"Unlocking a hero is a great accomplishment in the game, something we want players to have fun earning," said executive producer John Wasilczyk from the developer Dice, in a statement.

"We used data from the beta [testing period] to help set those levels, but it's clear that more changes were needed."

The change will be effective from today, he added.

The credit system has faced huge criticism from the game's fans.

The game without any of the extras is available for pre-order for between £49.99 and £69.99 in the UK, which many felt meant there should not be additional payments for the most popular Star Wars characters.

Good news! You can unlock everything in Star Wars battlefront EA 2 if you play it for a mere 8 hours a day. It will only take you a little over 1 year and 7 months to accomplish!

A post by EA on community news site Reddit, explaining the reasons for the original rule, has become the most "down-voted" in the site's history.

The post explained that the rule was intended to "provide players with a sense of pride and accomplishment for unlocking different heroes".

According to Reddit's own statistics the previous most unpopular post had a score of -24,333 and that was a message which asked people to downvote it.

If you dislike microtrasnactions in retail games, you probably shouldn't buy Star Wars Battlefront 2. Downvoting a post on Reddit may result in minor alterations, but refusing to buy the game is the best way to prevent a similar system from being implemented in future games.

One of the game's developers, tweeting from a locked account, said he had received seven death threats and more than 1,600 "individual personal attacks".