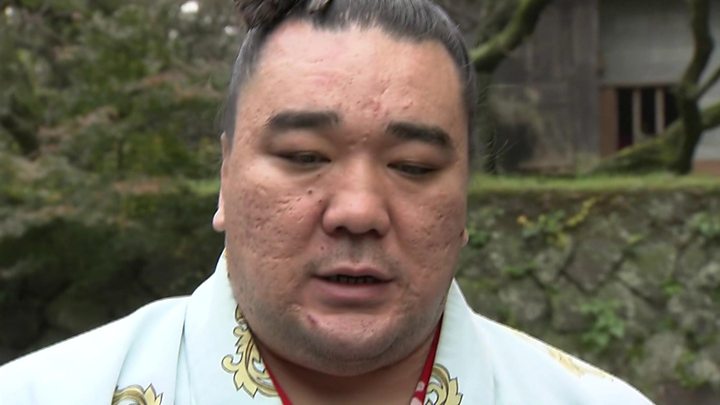 A sumo wrestling grand champion is alleged to have hit a fellow wrestler over the head with a beer bottle in a fresh scandal that has rocked the highly ceremonial sport.

The alleged victim, Takanoiwa, was hospitalised for several days, the Japan Sumo Association has said.

Japanese media report the incident occurred during a drinking session.

Takanoiwa, who is also Mongolian, is reported to have suffered a fractured skull. The 27-year-old is part of a so-called 'stable' led by Takanohana, a former grand champion who reported the incident to police, according to Kyodo news agency.

Harumafuji and his stable master, Isegahama, were questioned by association executives on Tuesday.

The grand champion apologised publicly but did not confirm the circumstances of the incident.

"As for Takanoiwa's injuries, I apologise deeply for causing trouble for stable master Takanohana, people affiliated with Takanohana stable, the Sumo Association and my stable master," he told reporters.

Weighing in at 137kg (300lb), Harumafuji is considered a relatively small sumo wrestler, and is lauded for his technique in the ring.

Sumo's origins lie in Shinto rites performed in temples, and Japanese fans expect wrestlers competing in the ancient sport to live up to strict standards of good behaviour.

Wrestlers are expected to not show emotion after a victory and a rigid hierarchy exists.

But this case is far from the first time that the sumo world has been hit by scandal and reports of violence outside the ring.

In 2007, a teenage novice died after being beaten up by older wrestlers, with the stable master subsequently jailed for five years over the abuse.

That case exposed a culture of bullying and hazing within the ancient sport's strict hierarchy.

Back in 2010, the sport was rocked by alleged links between sumo wrestlers and yakuza crime syndicates. A match-fixing scandal followed in 2011.

In 2010, Mongolian grand champion Asashoryu retired from the sport after reports of a drunken fight in Tokyo.