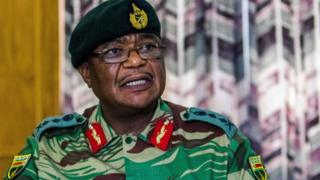 Zimbabwe's ruling party has accused the country's army chief of "treasonable conduct" after he warned of a possible military intervention in politics.

General Constantino Chiwenga had challenged President Robert Mugabe after he sacked the vice-president.

The party said the general's comments were "calculated to disturb national peace… [and] incite insurrection".

In a statement, the party said it would never succumb to military threats, and that it "reaffirms the primacy of politics over the gun".

The statement was signed by SK Moyo, the information secretary, on party letterheaded paper.

Mr Mnangagwa had previously been seen as an heir to the 93-year-old president, but First Lady Grace Mugabe is now the clear front-runner.

On Tuesday, BBC correspondents reported that a few armoured vehicles had been seen on a main public road outside the capital city, Harare, having left one of the country's main military barracks, Inkomo.

It is not clear where they were heading but they were not seen on the streets of the city itself. One of the vehicles had broken down on the side of the road.

Gen Chiwenga's warning of possible military intervention came on Monday at a news conference at the army's headquarters.

He said the "purging" within Zanu-PF was "clearly targeting members of the party with a liberation background", referring to the country's struggle for independence.

But the leader of Zanu-PF's youth wing, Kudzai Chipanga, said the general did not have the full support of the entire military.

"We will not sit and fold hands while threats are made against a legitimately-elected government," he warned.

The youth wing supports President Mugabe's wife, Grace, as his successor – something which the former vice president had opposed.

Mr Mnangagwa had told Mr Mugabe that Zanu-PF is "not personal property for you and your wife to do as you please" before he was forced into exile.