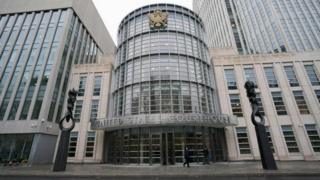 Argentine former football official Jorge Delhon took his own life on Tuesday just hours after he was accused of taking bribes.

Mr Delhon was accused of taking $2m (£1.5m) in payments in exchange for rights for broadcasting football games.

The 52-year-old lawyer worked for Football for All, a government programme which held the rights to football broadcasts in Argentina.

He was named during the Fifa corruption trial under way in New York.

The former officials have been accused of taking millions of dollars in bribes in exchange for granting contracts for top South American tournaments, charges which they deny.

One of the key witnesses in the trial is Argentine sports marketing executive Alejandro Burzaco.

Giving evidence in the trial on Tuesday, Alejandro Burzaco said he had paid Mr Delhon and another Argentine official $500,000 each every year from 2011 to 2014 to secure the broadcasting rights to football games.

Hours later, police in the Argentine capital, Buenos Aires, announced that Mr Delhon had killed himself.

The trial in New York is expected to last five weeks as prosecutors call dozens of witnesses to testify and present 350,000 pages of evidence.