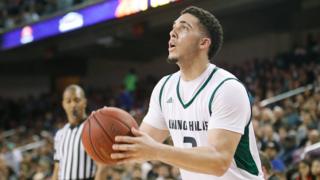 Three US college basketball players detained in China for alleged shoplifting have been released.

The University of California, Los Angeles (UCLA) players had reportedly been caught shoplifting at a Louis Vuitton store in Shanghai last week.

US President Donald Trump said he raised the issue with China's leader Xi Jinping during his Asia trip.

It remains unclear whether the charges have been dropped and if the players will be suspended from their team.

UCLA Chancellor Gene Block said he was pleased the three had been released.

"Our primary focus has been on bringing our students back safely," he said in a statement. "I want to be clear that we take seriously any violations of the law," he added, and said the incident was being reviewed by the university.

Commissioner for the Pac-12 league Larry Scott said in a statement the "matter [had] been resolved to the satisfaction of the Chinese authorities".

He thanked "the president, the White House and the US State Department for their efforts towards resolution".

News agency Reuters cited a senior White House official as saying the players had been given relatively light treatment due to the intervention by Donald Trump.

"What they did was unfortunate," Mr Trump told reporters in Manila on Tuesday.

He said the trio could have faced long prison sentences, but described the response by Mr Xi as "terrific".

A Chinese foreign ministry spokesman, asked about Mr Trump's account of events, said he was unable to provide any details.

Mr Trump has just wrapped up a 12-day tour of Japan, South Korea, China, Vietnam and the Philippines. However, critics have accused him of focusing on trade while largely ignoring human rights issues during his meetings with Asian leaders.

The UCLA team had been in China to play their season opener against another US team, as part of their league's efforts to boost international recognition and the personal experience of players.