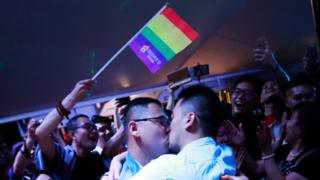 A report by the organisation has gathered the testimony of 17 people who say they underwent forced therapies to "convert" them into heterosexuals between 2009 and 2017.

It urged the Chinese government to take action against such illegal practices.

Human Rights Watch said that 11 of those interviewed were forced to take medication without being informed about their purpose or risks.

"If you do not change [your sexuality], you will get sick and die of Aids," one patient was told by a doctor.

"Have you ever considered the happiness of your parents?" another patient was asked.

Five of those interviewed were subjected to electric shocks while being shown images or videos – or given verbal descriptions – of homosexual acts.

"The doctor asked me to relax because I was going to practice some kind of hypnosis and to think about sex scenes with my boyfriend, at that moment I felt pain in both wrists. I did not know what was happening, " he said.

The advocacy director of the gay rights programme at Human Rights Watch, Boris Dittrich, said that many of those subjected to such gay conversion treatments did not report what had happened to them.

"The fear of having their sexuality made public and family pressure make it difficult for them to file an official complaint," Mr Dittrich said.

In July, a gay man in central China won an apology and compensation from a mental hospital over forced conversion therapy.

China decriminalised homosexuality in 1997 and it was removed from an official list of mental disorders in 2001.