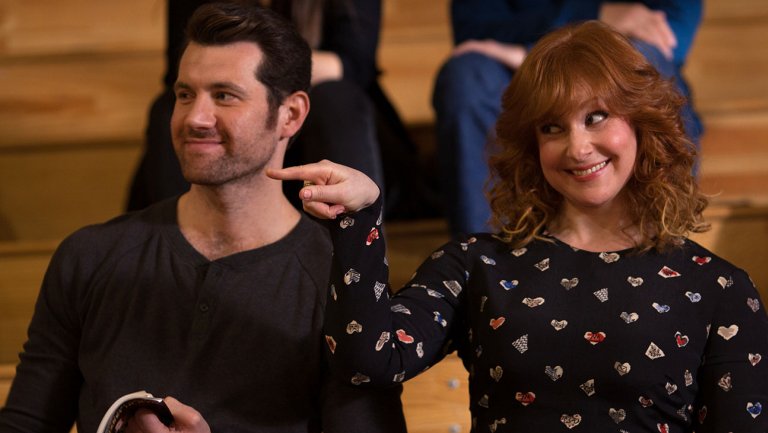 t's the end of the road for Difficult People.

Hulu has canceled the Billy Eichner-Julie Klausner comedy after three seasons at Hulu, The Hollywood Reporter has confirmed.

The news comes a month and a half after the end of the Universal Cable Production effort's third season. The single-camera comedy was originally developed for USA Network back in May 2014 before it landed a series order at Hulu six months later.

The series' cast also included Andrea Martin, who has since moved to Universal TV sophomore comedy Great News on NBC, as well as recurring players like Gabourey Sidibe and John Cho.

Yes it's true. DIFFICULT PEOPLE has come to an end. Thanks to many people but above all my friend, @julieklausner. A singular comedic voice & the funniest person I know. I cannot WAIT to see what Julie creates next. Thanks to all of you Difficult People out there who watched.

Hulu's decision not to bring back Difficult People comes as the streamer's original comedy slate is undergoing a major revamp. On Tuesday, The Mindy Project wrapped its six-season run, the last three seasons of which aired on Hulu. Tuesday also marked the premiere of the time-travel action-comedy Future Man from executive producer Seth Rogen, with the Josh Hutcherson-led half-hour series rolling out its entire 13-episode first season, unlike Hulu's normal weekly rollout. Hulu also recently renewed Casual for a fourth and final season.

On Thursday, Hulu will also debut the period comedy There's… Johnny, which is set at The Tonight Show during Johnny Carson's tenure in the 1970s. That project came to the streamer after the show's original home, the NBC-owned Seeso, shuttered in August.

The shift on the comedy front comes after at the end of a banner year for Hulu, which beat Netflix and Amazon to become the first streamer to win a best series Emmy for The Handmaid's Tale. That show's breakout success in the Trump era, combined with the addition of more than 7,000 episodes of TV shows like 30 Rock and Will & Grace, has helped subscriptions surge by 98 percent.

The streamer on Tuesday unveiled its early 2018 premiere date for new dramas such as The Looming Tower as well as returning series The Path and The Handmaid's Tale.

UCP has also seen its original comedy slate dwindle with the recent cancelations of Playing House on USA Network and Odd Mom Out on Bravo.

In addition to the end of Difficult People, Eichner's other TV series, Billy on the Street, also faces an uncertain future. The Emmy-nominated series left truTV in September after two years. When speaking with THR in October about his role on the seventh season of FX's American Horror Story, Eichner was optimistic if not vague about his show's future.

"We are transitioning, and it is going to evolve as it always has," he said at the time. "I can't announce all the details yet, but the way we distribute, it is going to change. I really want to meet the people who are watching me, where they are. We are taking all that into account, and we're finding a new situation."

For Becky, the cancelation also comes as the longtime manager has become embroiled in the Louis C.K. sexual misconduct scandal. Becky, C.K.'s manager, issued a lengthy apology Monday how he handled previously accusations of sexual misconduct involving C.K. His statement, in which Becky admitted "what I did was wrong," came after a New York Times published an expose Thursday in which five women said that C.K. had either masturbated in front of them or requested permission to do so. In his own lengthy apology the next day, C.K. admitted the allegations were true and issued a lengthy apology as well.

Becky has since been dropped by Pamela Adlon, who created, executive produces, writes, directs and stars in the FX comedy Better Things, which is exec produced by C.K.