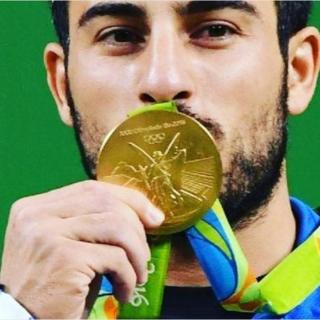 An Iranian weightlifter has put his Rio 2016 gold medal up for auction to raise money for the victims of last week's deadly 7.3-magnitude earthquake near the Iran-Iraq border.

Kianoush Rostami, 26, announced the news on his Instagram page.

The western Kermanshah province is the worst-affected area, with hundreds of homes destroyed and some residents sleeping outdoors in the cold.

Mr Rostami, himself from Kermanshah, said he was "taking a step, however small" to help those devastated by the tremor.

"I am returning my Rio 2016 Olympics gold medal – which actually belongs to them – to my people," he wrote in a widely-shared Instagram post yesterday, adding that he had not slept since the incident.

"I will put my medal up for auction. All the proceedings will go to those hit by the earthquake."

Mr Rostami, who is of Kurdish ethnicity, also said he was teaming up with several other athletes to collect aid for the victims, posting a picture of himself in front of duvets, warm clothes and water bottles.

"Amid all the bad news, Kianoush Rostami's announcement gave us hope," said one user.

"He is gifting the public what he had earned to make them happy," tweeted another.

But he is not the only prominent Iranian athlete stepping up to help.

Ali Daei, a former captain of Iran's national football team who is the world's leading international goalscorer, has also taken to social media to raise funds for those affected.

In a video posted on his Instagram page, Mr Daei said he was setting up a bank account to collect donations, assuring his followers the funds would directly go to the victims.

"We can do so many great things if we stick together," he added.

The video has been viewed nearly two million times since yesterday.

Sareh Javanmardi, who at the Rio games became the first woman ever to win a Paralympics shooting gold for Iran, has also followed Mr Rostami's lead, announcing in a video today she was also selling her medal to raise funds.

"I will auction my most valuable medal, my Rio 2016 Paralympics gold, to help my compatriots in Kermanshah," she said.