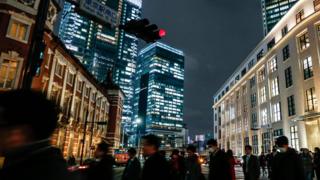 Japan's economy has expanded for seven quarters in a row in the longest period of growth in more than a decade.

Data showed gross domestic product (GDP) grew at an annualised rate of 1.4% between July and September.

Exports and stronger global demand for Japanese products has driven the expansion which helped offset a dip in consumer spending at home.

Martin Schulz, senior fellow at the Fujitsu Research Institute in Tokyo said the economy has been boosted by very strong export demand, growing at 6%.

With the "world economy recovering almost in sync and with expansions from the US through Asia to the European Union, this helps Japan's exporters tremendously," he added.

'Not out of the woods'

Mr Abe's economic policies have also been partly credited for the longest stretch of Japanese economic growth in 16 years.

Despite doubts about Abenomics among many economists, David Kuo, chief executive of the Motley Fool Singapore, said the numbers showed "quantitative easing is working in Japan".

After being re-elected last month, Mr Abe vowed to continue his efforts to propel the Japanese economy into a cycle of rising wages, spending and inflation.

But Mr Kuo said "Japan is not out of the woods yet" as inflation is still weak and consumer spending is still anaemic.

Private consumption fell an annualised 1.8% in the quarter, showing how Mr Abe's economic policies have not yet spurred consumers to spend,