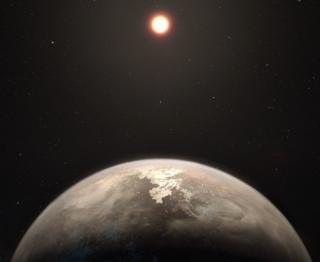 Nearby planet is prime target in search for life

The properties of this newly discovered planet – called Ross 128 b – make it a prime target in the search for life elsewhere in the cosmos.

At just 11 light-years away, it's the second closest exoplanet of its kind to Earth.

The closest one, known as Proxima b, looks to be less hospitable for life.

The new world was discovered by a team using the High Accuracy Radial velocity Planet Searcher (Harps) instrument at the La Silla Observatory in Chile. The work will be published in the journal Astronomy & Astrophysics.

Where should we look for alien life?

Ross 128 b orbits 20 times closer to its star than the Earth orbits the Sun. But because its parent star – a red dwarf – is much smaller and dimmer than our yellow sun, it receives only a little more solar radiation than Earth.

Consequently, it is expected to have a surface temperature close to that on our own planet.

Co-discoverer Nicola Astudillo-Defru from the Geneva Observatory in Switzerland said the find was the result of more than a decade of "intensive monitoring" using the Harps instrument.

In the search for habitable worlds beyond our Solar System, astronomers generally look for low-mass, rocky and temperate planets much like our own.

But these are comparatively difficult to detect; most of the 3,500 known exoplanets are so-called Hot Jupiters – huge gas giants orbiting very close to their parent stars that likely don't have suitable conditions for life.

Of the smaller contingent of Earth-sized planets, the vast majority orbit so-called red dwarf stars – the most common type. These stars are dim, which makes it easier to detect low-mass planets when they pass in front, blocking out a portion of their sunlight.

But these stars may not create the best conditions for sustaining life on orbiting planets. They are often more active than our own Sun – meaning they periodically produce "superflares" that are associated with powerful eruptions of charged particles, battering any nearby worlds with harmful radiation.

At "just" 4.2 light-years away, Proxima b is the closest exoplanet with a mild temperature. But it orbits a rather active red dwarf and, as a result, receives about 30 times more extreme ultraviolet radiation than Earth. However, Ross 128 b is the "quietest" nearby star to host a temperate exoplanet.

Astronomers often talk about a "habitable zone" around a star – it's the range of distances where temperatures allow water to remain liquid on the surface of a planet. Where the habitable zone is depends on the star itself: red dwarfs are dimmer and therefore cooler than the Sun, so their habitable zones are shifted closer in than the equivalent zone around our star.

There's still uncertainty about whether Ross 128 b is within the habitable zone, but scientists say that with temperatures of between -60 and +20°C, it can be considered temperate.

Next, astronomers want to study the atmospheric composition and chemistry of suitable, nearby worlds like Ross 128 b. The detection of gases such as oxygen could potentially point to biological processes on planets orbiting other stars.

Several gases have already been detected in the atmospheres of exoplanets, but this line of enquiry is expected to be boosted immeasurably when observatories such as the European Extremely Large Telescope (E-ELT) and the James Webb Space Telescope (JWST) come online over the next few years.