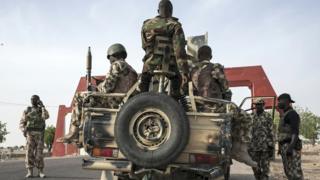 Four suicide bombers have killed at least 10 people and wounded many others in the north-eastern Nigerian city of Maiduguri.

The attackers, who included women, detonated their explosives in the Muna district, police said.

No group has said it was behind the attack. However, the Islamist militant group Boko Haram has carried out many attacks in Maiduguri, in Borno state.

Another attacker detonated explosives inside a house and the other two blew themselves up before reaching their targets, he added.

Boko Haram has been fighting to set up an Islamic state since 2009.

A report published by US anti-terrorist researchers earlier this year said it is the first insurgency in history to use more women suicide bombers than men.

Thousands of people have been killed and millions forced to leave their homes by Boko Haram violence in recent years.