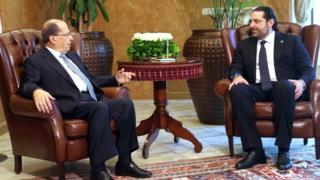 Lebanon's President Michel Aoun has for the first time publicly accused Saudi Arabia of detaining its prime minister, who resigned unexpectedly during a visit to Riyadh on 4 November.

Mr Aoun said "nothing justified" Saad Hariri's continued absence, and that it was a breach of his human rights.

He added that the Lebanese state could not wait long for Mr Hariri's return.

For his part, Mr Hariri once again insisted on Twitter that he would soon return to Lebanon and that he was fine.

On Sunday night, he said in a television interview that he was free to leave Saudi Arabia and that he had left Lebanon in order to protect himself.

The Saudi government has denied holding him against his will or putting pressure on him to resign in an attempt to curb the influence of its regional rival, Iran.