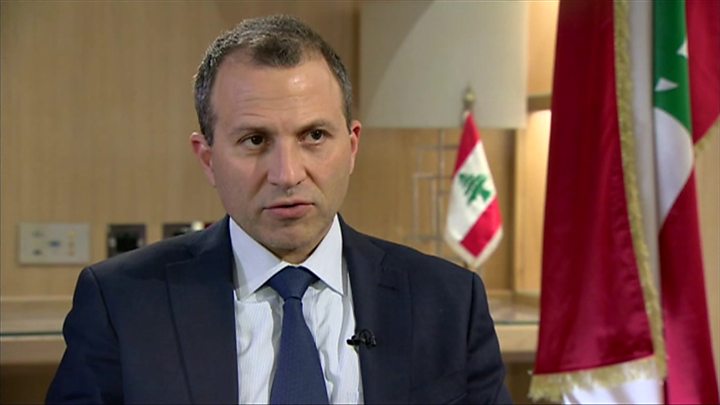 Lebanon's President Michel Aoun has for the first time publicly accused Saudi Arabia of detaining its prime minister, who resigned unexpectedly during a visit to Riyadh on 4 November.

Mr Aoun said "nothing justified" Saad Hariri's continued absence, and that it was a breach of his human rights.

He added that he considered it an "act of aggression" against Lebanon.

For his part, Mr Hariri once again insisted on Twitter that he would soon return to Lebanon and that he was fine.

French President Emmanuel Macron later "invited" Mr Hariri and his family to France, after speaking by telephone to the prime minister and Saudi Crown Prince Mohammed bin Salman, the Elysee Palace said in a statement.

Sources within the palace say Mr Hariri will arrive in France "in the coming days".

On Sunday night, Mr Hariri said in a television interview that he was free to leave Saudi Arabia and that he had left Lebanon in order to protect himself.

The Saudi government has denied holding him against his will or putting pressure on him to resign in an attempt to curb the influence of its regional rival, Iran.

The Shia Islamist Hezbollah movement, an Iranian proxy that Riyadh considers a terrorist group, is part of the unity government that Mr Hariri formed last year.

"Nothing justifies the failure of Prime Minister Hariri to return for 12 days. Therefore, we consider him to be held and detained, in violation of the Vienna Convention and human rights law," President Aoun's official Twitter account quoted him as saying.

"No decision can be made on a resignation from abroad," he added. "He should return to Lebanon to present his resignation or withdraw it, or to discuss the reasons for it and how to address them."

"We cannot wait longer and lose time. Affairs of state cannot be stopped."

Mr Aoun is a Maronite Christian former army commander who is an ally of the Islamist militia and political party Hezbollah.

He made the comments at a meeting with journalists and media executives.

"This affects the dignity of all Lebanese," he said, according to several Lebanese media outlets. "Hariri and his family are restricted in freedom of movement and are under surveillance."

Mr Hariri responded swiftly to the president's comments, writing on Twitter: "I want to repeat and affirm that I am perfectly fine and I will return, God willing, to dear Lebanon as I promised you, you'll see."

A member of Mr Hariri's political party, the Future Movement, also told Reuters news agency that the prime minister and his family were not being detained.

The BBC's Martin Patience in Beirut says Mr Aoun was merely saying what many senior Lebanese officials have expressed privately. But, our correspondent adds, the fact the president has gone public shows that he feels he has got little to lose.

Mr Aoun had previously only questioned the "mysterious" circumstances of Mr Hariri's resignation, which was made in a televised address from the Saudi capital.

Mr Hariri accused Iran of sowing "discord, devastation and destruction" in the region and said he sensed there was an assassination plot against him.

His father made his fortune in the Gulf kingdom and he owns properties there. He also holds both Lebanese and Saudi citizenship, and Riyadh backs his party.