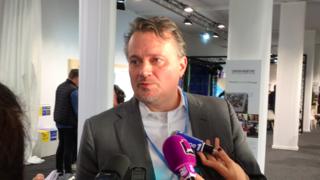 President Trump's special adviser on climate says that the US is seeking ways of continuing to be part of international climate discussions.

The Bush-era forum allowed the US to remain in climate discussions even when outside the formal process.

The leaders of France and Germany will address the talks today amid concern over slow progress in cutting carbon.

The group first met in September 2007 and featured delegations from the US, China, the EU, the UK and other countries with high levels of carbon emissions.

At the time the US was outside the formal UN climate negotiating process, having signed but not ratified the Kyoto Protocol, which limited the emissions of richer nations only.

When President Obama came into office, the MEM became the Major Emitters Forum, which helped shape the approach of larger economies in the run up to the Copenhagen climate summit in 2009.

The forum continued, in a much-reduced form until 2015.

Now, President Trump's key climate change adviser thinks it might be a way forward for discussions.

"We are looking into the possibility of having a major economies meeting, it is being discussed," he told reporters on the sidelines of this meeting in the former German capital.

"The only way you are going to have a rational discussion about climate mitigation and policy in general is if you bring in the economic and energy advisers, you are not going to have kind of conversation as long as it dominated by environment ministries."

However, the idea of reviving the Bush-era approach to tackling climate change was given short shrift by some observers here.

"This notion of creating a new institution is just a dodge by the Trump clique because they are not on pace to reduce emissions," said Paul Bledsoe, from the American University in Washington and a former Clinton White House climate adviser.

"I think almost every country in the world has had enough of Donald Trump's obfuscations particularly on climate change, I don't think they are going to be fooled."

Senior ministers from dozens of countries are arriving in Bonn for the high level segment of this meeting.

They will hear from UN Secretary General Antonio Guterres who will be attending his first Conference of the Parties.

Mr Guterres will tell the meeting that a broader coalition is needed if the temperature targets agreed in Paris are to be met.

His climate adviser told reporters that the UN was also looking to the future, and a new generation of political leaders, perhaps including a new occupant in the White House.

"By 2020 when those national decisions are being made, the group of leaders who will be making those decisions are almost entirely different to the leaders who agreed to the Paris agreement in 2015," Robert Orr said.

"The Secretary General is very conscious of that, we need to renew and rebuild the coalition of leaders day by day with all the new leaders."

Ministers from richer countries are likely get a cool reception at the high level segment of this meeting from developing countries. They are angry about the lack of carbon cutting action being taken by the developed world in the years before the Paris agreement comes into force in 2020.

"They are shirking their responsibilities," said Mohamed Adow from Christian Aid.

"They are postponing actions to post 2020 and that won't actually help deliver the kind of actions and ambitions that are needed."