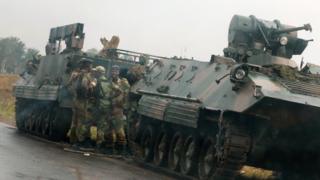 Soldiers are reported to have taken over the headquarters of Zimbabwe's national broadcaster, ZBC, amid a growing political crisis.

Heavy gunfire and artillery have also been heard in northern suburbs, although the situation is unclear.

There has been no word so far from 93-year-old President Robert Mugabe.

Zimbabwe's ambassador in South Africa, Isaac Moyo, dismissed any talk of a coup and said the government was "intact".

The worsening situation came after Zimbabwe's ruling party accused the country's army chief of "treasonable conduct" after he warned of possible military intervention.

General Constantino Chiwenga had challenged President Mugabe after he sacked the vice-president.

The US State Department said it was "closely monitoring" the situation in Zimbabwe and urged all parties to resolve disputes "calmly and peacefully".