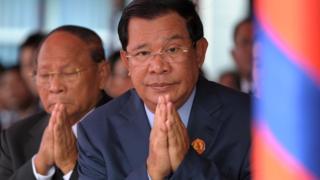 Cambodia's Supreme Court has dissolved the country's main opposition party, leaving the government with no significant competitor ahead of elections next year.

The Cambodia National Rescue Party (CNRP) is accused of plotting to topple the government – charges it denies, and describes as politically motivated.

Many CNRP MPs have fled, and its leader has been charged with treason.

He has long been accused of using the courts and security forces to intimidate opponents and crush dissent, but has for years allowed some measure of political opposition to his Cambodian People's Party.

The CNRP made unexpectedly strong gains in the 2013 elections, and had been set to fiercely contest next year's polls.

Senior CNRP politician Mu Sochua earlier told the AFP news agency that her party's dissolution would mark "the end of true democracy in Cambodia" and render the upcoming elections "meaningless".

The president of the Supreme Court is a member of the ruling party.

During the hearing, a government lawyer said the opposition had tried to topple the government "in order to grab power, like in Yugoslavia, Serbia and Tunisia", the Phnom Penh Post newspaper reported.

Prime Minister Hun Sen had earlier called on CNRP lawmakers to defect to his own party ahead of the ruling. He also said he was sure the party would be dissolved, adding: "I dare to bet my life on this happening".

There was tight security outside the court building in the capital Phnom Penh on Thursday, with Cambodian riot police standing guard.

Many of the capital's main streets were blocked in the morning, leaving the city even more gridlocked than usual.

The ruling comes after a prolonged crackdown on critics and dissent. In September, CNRP leader Kem Sokha was arrested and accused of conspiring with the US to overthrow the government. He was charged with treason.

Several US-backed media outlets and organisations have also recently been shut down or kicked out of the country.

The government had previously threatened to shut down media outlets it said jeopardised "stability" in the country.

Hun Sen, a former Khmer Rouge commander, is one of the longest-serving heads of government in the world.

He has overseen a prolonged period of peace and rapid economic growth in the war-scarred country but is criticised by groups like Human Rights Watch for being a ruthless leader unwilling to relinquish his hold on power.

In recent years he has positioned his government closer to China, which has showered Cambodia with aid and loans.

In 2015, then CNRP leader Sam Rainsy fled to France to escape arrest for a defamation conviction. He quit the CNRP in February, but said on Wednesday that he would return to politics.

Dozens of CNRP MPs also left the country ahead of the Supreme Court ruling, fearing arrest.

Earlier this year, the party made further gains in local elections that were seen as a bellwether for next July's polls.