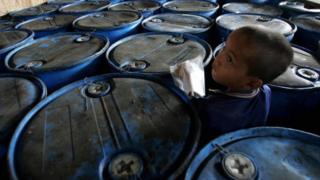 Chevron says it will push for Myanmar human rights

US oil giant Chevron has responded to criticisms over its partnership with a government accused by the United Nations of ethnic cleansing.

The firm has multibillion dollar energy investments in Myanmar.

About 600,000 Rohingya refugees have fled ongoing violence in the country since August, the UN has said.

After years of pressure from activist investors, Chevron said it will work for "a business environment that respects human rights".

"Chevron values the on-going dialogue with the stockholders on this critical issue of violence in Rakhine State, Myanmar," the firm wrote in a statement to the BBC.

"We believe that US investment is a strong mechanism for economic growth and development.

"We will continue to work with other US companies and the government to promote the value of US investment in Myanmar and the need to foster a business environment that respects human rights".

Chevron, with French oil giant Total, has oil and gas exploration projects in the resource-rich Rakhine Basin, as well as established projects in other parts of Myanmar.

The northern Rakhine state has been the site of alleged human rights abuses including rape, mass murder and the destruction of villages.

Criticisms have been levelled against the country's elected leader, Aung San Suu Kyi, who in October formed an emergency economic committee to resettle displaced refugees.

Foreign investors have to work in partnership with the country's national Myanma Oil and Gas Enterprise (MOGE) if they want to invest in the country's still largely state-owned energy sector.

Activist Chevron investor Joshua Brockwell from Azzad Asset Management told the BBC: "There is concern for business assets in the region as well as reputational risks that go along with having your name associated with a country that is possibly engaged in genocide,"

The firm has asked Chevron to push the government to implement effective policy to bring peace to the region.

Azzad Asset Management has called upon the oil giant to consider "not doing business" in the country.

The US firm handles $53bn worth of assets, including funds from Chevron.

Chevron's historic and current business involvement in the country was also questioned by Azzad Asset Management, Mr Brockwell said, after a closed conference call with Chevron in October.

Hundreds of thousands of people have been fleeing Myanmar's Rakhine state and arriving in refugee camps in neighbouring Bangladesh for more than a decade.

The latest flare-up of violence in August is blamed on a militant reaction to prolonged and intensifying fighting in Rakhine.

Human rights organisations report accounts of violence against the country's Rohingya Muslims, including refugee eyewitnesses of their villages being burned down by the country's military.

China also has major state-owned investments in Rakhine; a $7.2bn deep sea port, and gas pipelines which run under Rakhine State, pumping gas from the Bay of Bengal into China.

India also has a multibillion dollar multi-transport hub in the country.

The creation of a committee for a 'Rakhine Economic Zone' was announced in October, to develop key economic areas of Rakhine State, including fishing and agriculture.

"Of course we're talking about the Rohingya. Both those returning from Bangladesh, but also the [internally displaced] local Rakhine population.

"This is a recognition that in a country as poor as Myanmar, the people with money are basically businesspeople.

"But of course, economics isn't everything".

Within days of the committee's first meeting, Aung San Suu Kyi made her first visit to Rakhine since August with one of the country's most prolific businessmen.

But there are suspicions on many sides. Philippines-based Bob Herrera-Lim from Teneo Intelligence, which analyses business risk in South East Asia, told the BBC:

"There are definitely suspicions as to whether or not this is simply for show.

"A large amount of Myanmar's natural resources, like oil and gas, forests and minerals, are in conflict zones. So there will have to be improvements in governance and perceptions of Myanmar."

But there has been a slowdown in new extensions to existing projects, says one key Myanmar investor.

"We still see the long term potential of Myanmar given the population size, increase in consumerism, the telecomm revolution," he said.

"Having said that, there is a lot of political noise on the Rakhine situation. It's fair to say our investors are aware of that and staying close to it.

"Some of the new gas exploration projects may have dialled back a little bit, but a good chunk of that may not be politically driven – and just the nature of the sector as oil and gas prices have come down globally."