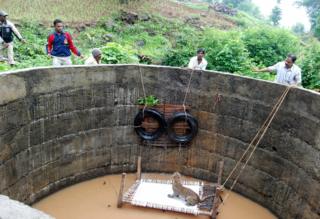 Around 8 am on July 19, 2012, Anand Bora received a phone call saying a leopard was trapped in a well in a nearby tribal village in the western Indian state of Maharashtra.

Mr Bora was used to these phone calls – a teacher by profession, he is also a wildlife photographer who has documented several rescue missions carried out by forest officers.

He rushed to the village, Bubali, and photographed the three-and-half-hour long effort to save the tired and terrified animal from drowning.

One of those photos, where the leopard looks up at its rescuers mid-way through the effort, won a prominent wildlife photography award in India last week, prompting questions about the story behind the image.

The five-year-old image stands out now amid rising incidents of animal-human conflict in India.

"When it looked up, it seemed to sense that we wouldn't hurt it, that we were trying to help," Mr Bora recalled in an interview with the BBC.

When the forest officers arrived, villagers told them the leopard had been swimming for the last 25 hours to stay afloat.

It was raining and the villagers had been diverting the rainwater to the well, thinking the leopard could swim to the top if the water level rose.

"We told them that the animal would drown in that time," Suresh Wadekar, a senior forest officer, who supervised the rescue effort, told the BBC.

Instead, Mr Wadekar decided to let the leopard rest because he noticed that it was "breathing heavily".

So with the villagers' help, the officers lowered a wooden plank with two large tyres tied to it into the well. Once the leopard stepped on to the plank, some of them held it steady while the others went looking for a "charpoy", a sturdy woven bed on wooden legs.

The leopard rested about an hour-and-half before they lowered the bed into the well. The leopard immediately jumped off the plank and on to the bed, Mr Bora said.

"When they pulled the bed all the way up, it stayed on the bed as it glanced around at the people who had gathered," he added. "Then it suddenly leapt over the rim of the well and ran into the forest. It all happened in seconds."

Hyenas, foxes and leopards often stray into sugarcane fields in the district while chasing prey or searching for water, and fall into wells or are trapped in other ways.

Mr Bora says he has photographed more than 100 rescue operations, including some that involved Eurasian eagle owls. One owl, which lost a wing in a fight with a crow, had to be treated for months before it could be released back into the wild.

Mr Bora, who has shot several efforts to rescue leopards, says the mission in Bubali was unusual because the villagers didn't demand that the animal be tranquilised.

He remembered another instance where a leopard was trapped in a well and villagers threatened to hurt forest officers if they did not tranquilise it and take it with them.

"There was no pressure this time," he said. Although many villagers were present during the effort in Bubali, Mr Bora said they remained calm and stayed away from the well because Mr Wadekar was concerned that the crowd would agitate the leopard.

Mr Wadekar, who has rescued leopards 137 times over 20 years, said he has used a tranquiliser in more than 100 of those operations. He believes that since this was a tribal village, they were more "accepting" of the animal's presence.

But not all human encounters with leopards end like this. A leopard died when it was set on fire by a mob hours after it had killed a girl in November 2016.

A leopard also injured six people in a school in the Indian city of Bangalore . It was eventually tranquillised and released.

This year alone, Mr Wadekar said, two children were killed by leopards in Nashik. But villagers never caught the animals.

"You have to create awareness," Mr Wadekar said. "These killings are an accident. They don't prey on humans."

But instances of human-animal conflict have been increasing in India, where shrinking animal habitats often drive elephants, tigers and leopards into residential areas.

Conservationists too have warned that such violent confrontations with animals are likely to increase.

Leopards are a protected species in India and all international commercial trade in their body parts is banned.

Wildlife experts say there are no reliable population estimates of these big cats in India, but a recent wildlife census estimated a leopard population of between 12,000 and 14,000.

All photos by Anand Bora