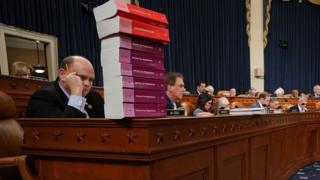 House Republicans have passed a controversial overhaul of the US tax code that slashes corporate rates.

Thursday's vote came after US President Donald Trump made a rare visit to Congress to rally lawmakers around the tax overhaul plan.

The Senate is working to build support for its own version of the bill, but one Republican has said he is a 'no'.

The plan also faces stiff opposition from the Democrats, who say it is a give-away to the wealthiest Americans.

The Republicans' attempts to pass the most significant overhaul of the US tax code since 1986 are a critical test for the party and president.

Republicans have called for changes to the code for years, but did not have support from the White House until President Trump's election.

He has served as cheerleader-in-chief for the measure, calling the bill a "big, beautiful Christmas present" for families.

The bill cleared the House 227-205, without Democratic support. Thirteen Republicans also voted no.

Representative Paul Ryan, who leads Republicans in the House, called it a "historic day".

The White House celebrated the House vote as a "big step".

"A simple, fair, and competitive tax code will be rocket fuel for our economy, and it's within our reach," the press secretary said in a statement after the vote. "Now is the time to deliver."

What's the next step?

Analysts also expect Republicans in the Senate to pass the measure without Democratic votes and later reconcile the two versions.

But Republicans are facing some opponents within their own party, which could endanger the legislation's prospects.

Without Democratic support, the Senate can afford to lose only two Republican votes.

On Wednesday Senator Ron Johnson, from Wisconsin, said he does not support the bill and does not think it does enough to help small businesses.

What's in the plan?

Broadly speaking, the Republican proposal would slash the corporate rate from 35% to 20% and change how overseas profits and payment from overseas subsidiaries are taxed.

It would also eliminate a range of targeted benefits for individuals and families, in favour of boosting the amount people can deduct from their tax bill.

Republicans estimate that the average American family of four will see their taxes lowered by $1,182 (£895).

Critics say the biggest beneficiaries will be large firms and very wealthy families. While many households could see lower taxes at first, over time some of those benefits would expire.

Opponents say the new version does not do enough to simplify the tax code for businesses – one of the original goals of the reform – and they say the proposal is fiscally irresponsible.

The House plan would cost more than $1.4tn to 2027, while the Senate version would cost $1.5tn, according to estimates from the Joint Committee on Taxation.

Republicans hungry for a win

After a frustrating year, Republicans desperately need a win – and on Thursday they took a significant step toward one. Clearing a tax bill through the House is just the first leg of an arduous journey for conservatives, however, and even success may come with a price.

The Senate is working on its own set of reforms and, if it can pass them (no small task, given their narrow majority), both chambers of Congress will have to negotiate a compromise bill.

If the finished product looks anything like the drafts, Republicans could be handing a potent campaign issue to Democrats in next year's midterm elections.

While corporate tax cuts will satisfy the conservative donor class, the fact that they are permanent while the personal breaks expire in eight years will make for devastating Democratic campaign commercials.

Add in that the Senate version undermines Obamacare reforms, some cherished tax deductions will be eliminated and middle-class Americans in states with high local or state taxes could see their net federal taxes go up, and it's a recipe for pain for Republicans in at-risk congressional districts.

For now, however, it seems to be full speed ahead.

How do House and Senate bills compare?