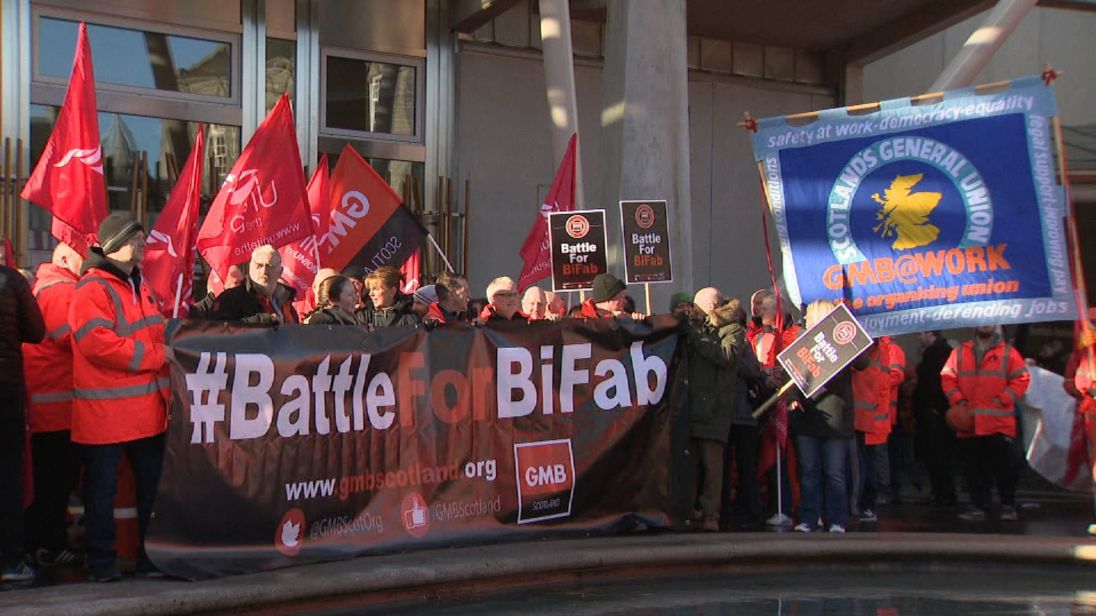 The union leader has told Sky News a dispute threatening 1,400 jobs is a battle for the future of skilled manufacturing in Scotland.

The GMB union's Scotland secretary, Gary Smith, made his comments after hundreds of workers at Burntisland Fabrications descended on the Scottish Parliament to demand help.

The engineering firm, known as BiFab for short, has filed a notice of intention to appoint administrators as it faces a critical cash position linked to ongoing contracts.

The main issue is a payments dispute between BiFab and Dutch-owned contractor, Seaway Heavy Lifting (SHL), on a windfarm project for a consortium led by energy firm SSE.

SHL has denied allegations it has failed to pay BiFab for completed work.

A spokesman counter-claimed it had suffered from cost over-runs and production problems.

BiFab staff at Burntisland and Methil in Fife and Arnish on the Isle of Lewis have voted to continue working until further notice in the knowledge they risk not getting paid unless the row is resolved.

The union has even refused to allow elements of its members' work to leave the sites for fear SHL will try to get it completed elsewhere.

Mr Smith told Sky's Ian King Live that the Scottish and UK governments should intervene to resolve the dispute as it risked becoming a broader battle for skilled work in Scotland.

Scottish Economy Secretary Keith Brown told the workers' rally: "The priorities expressed to me by the trade unions are the same ones that we have – to continue BiFab, to make sure the workers are paid in the meantime whilst we sort out the longer term future, and to secure that long term future beyond the contract at the centre of this dispute.

"What I will say of the people we've spoken to – there's a general recognition of the excellence of the workforce and the skills that are in that workforce.

"That is the strongest card we have to play in the negotiations and discussions that we have. We are absolutely committed to this."

IcetruckNovember 16, 2017
Like story:
tweet
FDA OKs new therapy for some hemophilia patients
Here Are 8 After Effects Of Regularly Drinking Coke