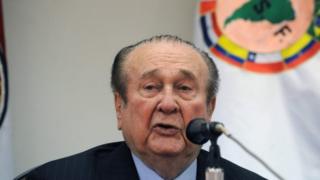 Nicolas Leoz: Conmebol ex-chief to be extradited from Paraguay

A judge in Paraguay has authorised the extradition to the US of Nicolás Leoz, the former president of Conmebol, South America's football confederation.

Mr Leoz is one of the main suspects in a huge bribery and money-laundering scandal being investigated by the US Justice Department.

The former Fifa executive has been under house arrest in the Paraguayan capital, Asunción.

He has denied wrongdoing and will appeal against the extradition ruling.

The extradition request had been long expected and took place in the week that an Argentine witness implicated a number of South American football officials in corruption at a trial in New York and bribery in a court in New York.

The trial in New York is expected to last five weeks as prosecutors call dozens of witnesses to testify and present 350,000 pages of evidence.

Mr Leoz served as president of Conmebol for 27 years.

Prosecutors believe he was one of the masterminds behind a vast corruption scheme in the confederation along with Brazilians Joaõ Havelange and Ricardo Teixeira, as well as Argentina's Julio Grondona.

The US Justice Department suspects Mr Leoz of receiving millions of dollars in bribes in exchange for marketing and television rights for games.

The 89-year-old's legal team have so far frustrated all attempts to extradite him. Lawyer Ricardo Preda said "the facts he is accused of in the United States are not punishable in Paraguay. "