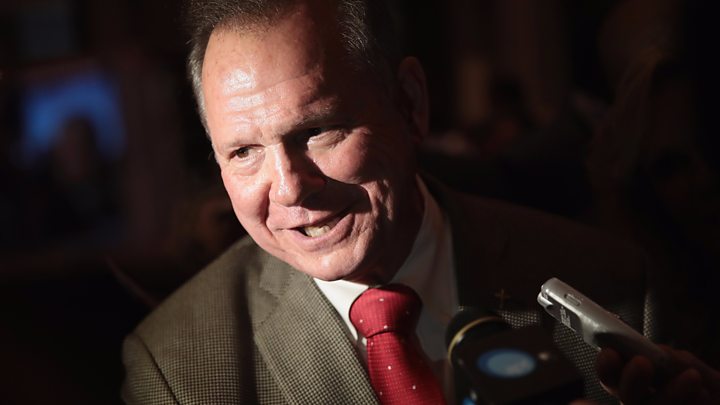 A lawyer for embattled Senate candidate Roy Moore has raised questions about evidence provided by a woman who claims he sexually assaulted her as a teen.

Beverly Young Nelson showed Mr Moore's purported signature and message in her high school yearbook as proof of his alleged interest in her.

His lawyer cast doubt on the signature and called on Mrs Nelson to release the yearbook for handwriting examination.

Many of the woman accuse him of initiating sexual contact while they were teenage girls.

He tweeted a defiant message – "Bring. It. On" – to Mitch McConnell, the Republican Senate majority leader, who is among those to have urged him to quit.

Dear Mitch McConnell,
Bring. It. On.

Mr Moore's lawyer, Phillip Jauregui, told reporters on Wednesday the allegations against his client were "incredibly painful" and suggested his fifth accuser had altered the judge's signature in her yearbook.

"Was it written by somebody else?" Mr Jauregui asked, before urging Mrs Nelson's lawyer, Gloria Allred, to release the yearbook to a "neutral custodian" to analyse the handwriting.

He claimed the handwriting was different from the judge's signature.

Mrs Nelson said she was 16 years old and working as a waitress at the Olde Hickory House when Mr Moore, who was 30 at the time, allegedly wrote the message. She claims he tried to force himself on her about a week later.

Her account followed a Washington Post report quoting four women by name, including one who alleged Mr Moore initiated sexual contact with her when she was 14 – beneath the legal age of consent in Alabama – while he was a prosecutor in his 30s.

The newspaper on Wednesday night published two more accounts from women who claimed Mr Moore harassed them when they were younger.

Gene Richardson, 58, alleges Mr Moore called her at her high school to ask her out. She rebuffed his offer, but said she felt pressured to go out with him after he allegedly asked again at the Gadsden Mall, where she worked. She claims the date ended with a "forceful" kiss.

Becky Gray, who was 22 at the time, also worked at the mall and said she complained to her manager about Mr Moore's behaviour. She alleges the manager told her it was "not the first time he had a complaint about him hanging at the mall".

Mr Moore's campaign did not directly address the new allegations but suggested in a statement to the newspaper that the claims were politically motivated.

Locals stand by him

As the Republican establishment lines up to denounce Roy Moore, many in his home state are standing by him. At a gathering I attended in Montgomery, many GOP voters felt the allegations of misconduct were false, and questioned the timing of their emergence.

Was this is Democratic conspiracy, some asked. Why didn't any of this come out before, in the many decades Roy Moore has held public office? Some local Republican associations in the state have issued statements standing by their candidate for the Senate – which makes any national moves to remove him from this race tricky.

Many people I've met here say Alabamans don't like being told what to do by people from outside. Roy Moore represents the conservative, evangelical base of the party, which is sick of decrees from the so-called Washington elite.

Polls numbers might show the Democrats making ground here in what's usually safe GOP territory – but the fact Roy Moore still has a base of support is why he continues to tweet that he's not going to quit, and why he is still – very much – in this race.

The news conference came as another woman accused Mr Moore of sexual misconduct, alleging that he groped her in his office when she was 28 years old.

"There's a special place in hell for people who prey on children," she said. "I've yet to see a valid explanation [from Moore] and I have no reason to doubt the victims' accounts."

President Trump has yet to publicly comment on the controversy while several prominent Republicans have called on him to "step aside" in the Senate race.

Mr Jauregui on Wednesday disputed Mrs Nelson's claim that she did not have contact with Mr Moore after the alleged 1977 incident.

He said the judge presided over Mrs Nelson's divorce in 1999 and suggested she lifted his signature from her court documents from the case.

Mr Moore had no recollection of signing "DA" after his name, but had an assistant with those initials at the time of Mrs Nelson's divorce who would have stamped it on court filings, Mr Jauregui said.