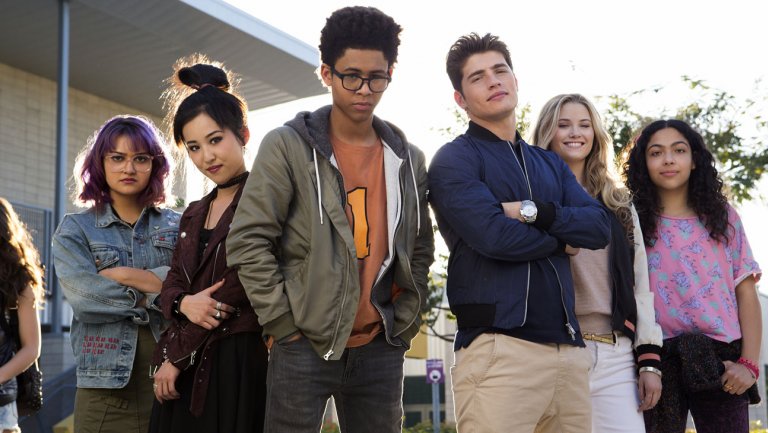 'Runaways' Primer: Everything to Know About Hulu's Marvel Series

It's Marvel, 'Stranger Things' and 'Gossip Girl' all rolled into a single package, according to what the 'Runaways' cast and creators tell THR.

"Everyone thinks their parents are evil. What if yours really were?"

That's the central conceit of Marvel's Runaways, according to creators Josh Schwartz and Stephanie Savage, the team behind The O.C. and Gossip Girl now set to infuse the Marvel Cinematic Universe with enough teenage angst to make a telepathically controlled velociraptor blush.

First created by comic book writer Brian K. Vaughan and artist Adrian Alphona, Runaways burst onto the comics scene shortly after the turn of the millennium, and has been discussed as a top prospect for live-action adaptation in the several years since — in development as a Marvel Studios film at one point, with Vaughan himself attached to write the script. For his part, Schwartz has had his eye on The Runaways since the Marvel property's inception.

"I've loved the comics since they were first published in 2003," Schwartz tells The Hollywood Reporter. "They actually came out the same year as The O.C. premiered. I felt a real kinship with Brian's voice and writing. After I read the book, I said, 'I don't know who Brian K. Vaughan is, but this man is speaking to me.' I fell in love with those characters instantly. It had such a great hook to it, and it moved like a freight train, but the character work and the humor and the voice of it was unlike anything I had ever read before in a comic book. It blew me away.

"When I first read it, I never believed we would have the chance to work on it," he adds. "But we heard it was no longer in feature development [with Marvel Studios] and was moving to television, and it was a must. We had to get in to see Marvel right away to tell them how much we loved this and how much we wanted to do it."

What was it about Runaways that hooked Schwartz and Savage so early on? Viewers will find out for themselves when the new series premieres Tuesday on Hulu, with the first three episodes released in one shot. Until then, here's what you can expect when you click play, according to Runaways' creators and series regulars themselves, all of whom weighed in on the show's premise, the size and diversity of its cast and its relationship with the Marvel Comics source material.

Stephanie Savage (co-creator, TV series): "We're delving into a question as old as time. Everyone thinks their parents are evil. What if yours really were? I think you're going to meet a group of diverse kids who each have their own personality and point of view. They don't agree on very much. But one thing they do agree on is seeing something pretty messed up, and they're all determined to get to the bottom of it."

Ever Carradine ("Janet Stein"): "I think of it as Gossip Girl meets Marvel. Josh and Stephanie do a great job with family relationships and teenage issues in a very real way — a little bit heightened, of course! But it's all meeting through Marvel, so there are superpowers, Fistigons and Old Lace. She's a dinosaur, for those who don't know."

Virginia Gardner ("Karolina Dean"): "[Runaways] is almost like Stranger Things, in that it's fun and unique in its tone. You have this kids' storyline and that excitement, but you also bring in the adults and their storyline, which gives it a whole new feel. It's grounded and dramatic and it's also more of a family drama than it is about superpowers. It's a really good marriage between the two."

Brian K. Vaughan (writer and co-creator of the Runaways comic): "At the time [the comics were created], it felt like most other superhero characters revered their parents. Bruce Wayne is always staring up at the portrait of his dead parents. Peter Parker is obsessed with his guardians. I felt like they really loved their parents. I always thought if Bruce Wayne's parents hadn't died by the time he was 16, he would probably be a selfish shit, getting into fights with them and yelling at them. I wanted to take a bunch of characters who instead of revering their parents, rightly didn't trust them. It felt like an exciting change, and something I thought a lot of young readers would be able to identify with."

Lyrica Okano ("Nico Minoru"): "I really related to each and every one of these teenagers. I never had a superhero to look up to whose Asian American and also so layered and complicated — not just my character, but everyone else's characters are layered so beautifully like that as well. It sucks to say that we're one of the only Marvel TV shows showcasing such a diverse group of teenagers to tell so many different stories, but we are."

Allegra Acosta ("Molly Hernandez"): "It's so important to me that this is a group of six badass ethnically diverse and different in personality female-centric character-based show. It's so amazing."

James Yaegashi ("Robert Minoru"): "As the story unfolded, I really appreciated that I'm getting to play a leading man character as an Asian American guy with no comment whatsoever on the fact that I'm Asian American. Just as a regular, successful person from California, dealing with the issues he has to deal with. To me, that's a wonderfully subversive thing. It shouldn't be a new thing but I think it is. It's exciting to be a part of that."

Vaughan: "I knew I wanted to do a book where males were in the minority. It always felt like team books had one, maybe two female characters. At best, you would have parity, and have an equal number of both. But I knew I wanted the women to outnumber the men."

Gregg Sulkin ("Chase Stein"): "I think I responded to the diversity the comic possesses, and how it's sometimes okay to challenge authority. I think it's a very important time, especially in our current political climate, for people to realize it's okay to do so — although preferably in a respectful, calm and peaceful manner. Us Runaways don't get the chance to really be calm though!"

Brittany Ishibashi ("Tina Minoru"): "I love that there are all of these character tropes, and you need them in order to distinguish between all 800 of us series regulars! But you quickly see there's a lot more to these people than that. You get to see behind the curtain of these seemingly devious deeds and unravel their motivations and the inner-workings of these characters. It's not as simple as: 'I think our parents just killed someone.' It's a very heavy thing. We get to really explore the gray area between good and evil. On paper, the parents are the villains, but you'll start to question what is good and evil. You'll change sides a lot, which is a ton of fun."

Brigid Brannagh ("Stacey Yorkes"): "Every moment that happens is surprising. It makes me more curious. As soon as I think I understand something or know where it's going — this is what fits here, and this is what fits there — I'm surprised. It's always like, 'Oh, wow. Crap. That just happened?' It's a little bit like Mr. Toad's Wild Ride. It really keeps you intrigued. There are layers and layers. I was fascinated. I really can't wait to find out what the hell is happening here. I kept saying that the end of each script — and I couldn't believe that each script made me curious in that way."

Angel Parker ("Catherine Wilder"): "That dynamic of having all of these parents who are always there for you is such a TV stereotype — and to flip it on its head where you still have a mother who is always there for you, but is also a killer, is just too cool."

James Marsters ("Victor Stein"): "This is a world where there's a gulf between parents and children. The parents are corrupting themselves in order to provide for their children and to try to build the world they think should be built, and the children have very clear moral compasses, but don't necessarily understand all of the complexities of the world around them. There's this chasm between the two generations that cannot be bridged."

Ariela Barer ("Gert Yorkes"): "As teenagers, there's this antagonism towards your parents, whether for valid reasons or teenage rebellion reasons — which is another valid reason, in all honesty! Overall, there's that feeling when you're a teenager, and I think it's great that we're taking this feeling and this time and turning it into a tangible and physical antagonist, that now they're actively working against. It's really exciting to explore that metaphor as an actor."

Ryan Sands ("Geoffrey Wilder"): "Even though the show's protagonists are young and high school aged, there's a maturity to this show. The parents are a big factor in this. The 40 and over crew will be taken care of there. It's scary and suspenseful and fantastical in many respects, but there's definitely something in here for everyone in the show — everyone being an operative word, because there are so many people that there's a great chance you're going to see someone on this show you can identify with."

Annie Wersching ("Leslie Dean"): "The really enticing thing about Runaways is there's something for everybody. Young fans will be really into the relationship stuff and the everyday drama the kids are dealing with. At the same time, the hardcore Marvel fans will love the superhero action."

Rhenzy Feliz ("Alex Wilder"): "What I love about it is how sometimes you might even forget you're watching a Marvel television show until you see those powers again and all of the action sequences. It's so grounded. It's so about what's happening in the minds of these six kids and the parents as well. It's those dynamics. Those relationships are playing out so well. It's rooted in relationships. At the same time, it still has those big sequences. The first episode might be the least Marvel-ish. More and more, it ramps up. We start having to use powers more and more because of the circumstances we're put in."

Savage: "We're not thinking too much about who else is out there in [the Marvel Cinematic Universe]. Right now, for season one, we're living very much in the early issues of the first volume of Brian and Adrian's comic. We're very focused on telling the story of our Runaways and the Pride."

Kip Pardue ("Frank Dean"): "It feels true to the comic, but at the same time, it does stuff that's necessary for TV. Even Brian K. Vaughan told me personally: 'You hope someone's going to come along and make your material even better.' I feel like Josh and Stephanie have done that — which is a pretty nice compliment!"

Marvel's Runaways premieres Tuesday on Hulu with its first three episodes. Follow along with THR's coverage for more interviews with the cast and crew.