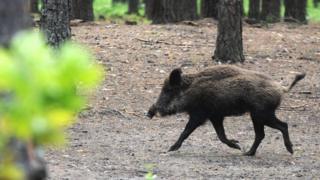 A New Zealand family are seriously ill in hospital, with a wild boar they hunted and ate being investigated by doctors as one possible cause.

Friends of the family wrote in a Facebook post that Shibu Kochummen, his wife Subi Babu and mother Alekutty Daniel collapsed after eating the meat.

Health officials said there is no evidence of any "broader contaminated game" or any risk to public health.

Two children who did not eat the meat are unaffected.

But the three adults in the family had cooked and eaten the boar, before being found on the floor of their home in Waikato by emergency services last Friday, friends of the family said.

Joji Varghese told the BBC that doctors are waiting on a toxicology report and that "the nature of the contaminant is unknown".

In a Facebook post appealing for help, Mr Varghese and other friends of the family wrote of the severity of their condition, adding that officials had sent samples of all food items found in the family's home for testing.

The family moved to New Zealand from India five years ago and Mr Kochummen, a hunting enthusiast, had earlier shot the wild boar which they eventually ate.

"We are still investigating potential sources for the illness in this case," said Richard Vipond, a medical officer at the Waikato Health Board, in a press release.

He added that those who hunt or handle game meat should follow the guidelines set out by the Ministry of Primary Industries to reduce any risk of contamination.

Mr Kochummen and Ms Daniel are reportedly stable in a ward, but Ms Babu remains in critical condition, according to Dr Vipond.

The Indian High Commission told the New Zealand Herald that embassy staff are working with family and friends.