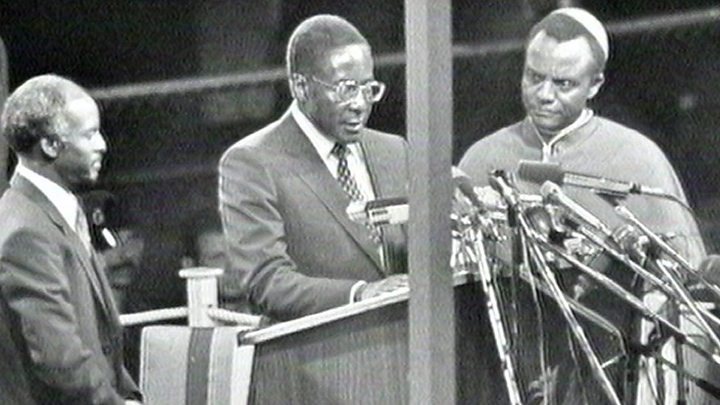 South African government ministers are in Harare for crisis talks with ousted President Robert Mugabe and military leaders who have seized control.

They are trying to reach a deal on the future of the man who led the country for 37 years before being put under house arrest on Wednesday.

But sources suggest Mr Mugabe may be resisting pressure to resign.

They say Mr Mugabe is insisting he remains the legitimate president. Regional bodies such as Sadc and African Union (AU) will be keen to reach a constitutionally sound resolution to the crisis rather than to endorse a military takeover, say correspondents.

Why did the military take this action?

President Mugabe, 93, has been in control of Zimbabwe since it threw off white minority rule in 1980.

However, the power struggle over who might succeed him, between his wife Grace Mugabe and her rival former Vice-President Emmerson Mnangagwa, has split the ruling Zanu-PF party in recent months.

Last week, Mr Mugabe came down in favour of his wife, sacking Mr Mnangagwa, a veteran of Zimbabwe's anti-colonial struggle and of Zanu-PF.

That proved too much for military leaders who seized control of the country on Wednesday.

The capital is been on edge.

Mr Mugabe has been under house arrest. A Roman Catholic priest known to him for years, Father Fidelis Mukonori, is trying to mediate a deal on his future with the military.

Sticking points are said to include what role Mr Mnangagwa will play and the security of Mr Mugabe's family.

Zanu-PF's UK representative, Nick Mangwana, has suggested to the BBC that Mr Mugabe could remain nominally in power until the party congress in December, when Mr Mnangagwa would be formally installed as party and national leader.

Reuters news agency is quoting a source as saying Mr Mugabe's wife Grace is in Mr Mugabe's compound, along with senior figures from the "Generation-40" group supportive of the first lady – cabinet ministers Jonathan Moyo and Saviour Kasukuwere,

What do the South Africans want to achieve?

The Sadc mission will be pushing for a democratic solution. The body, which represents 16 countries, does not support coup-led governments as this would set a dangerous precedent in the largely peaceful region, says the BBC's Pumza Fihlani in Johannesburg.

A Sadc emergency meeting is scheduled to take place in Botswana at 15:00 local time (13:00 GMT) to try to help find a resolution.

One Zimbabwean opposition leader, Tendai Biti, told the BBC he wanted to see a transitional authority in place.

He later told Reuters that he would join a national unity government if Morgan Tsvangirai, head of the Movement for Democratic Change-Tsvangirai (MDC-T) party, was also in it. Mr Tsvangirai has been abroad receiving treatment for cancer.

Reports suggest that the military are now trying to quash the threat posed by Mrs Mugabe and her allies.

Local media reports say a number of other senior members of the "Generation-40" group supportive of the first lady have been detained.

What are Zimbabweans being told?

Zimbabwe's media usually toe the government line and today's lead stories make it clear there is a new line to follow.

There is a striking absence of tough questions about what the army is doing.

"Business as usual countrywide," says The Herald, a government-owned newspaper. Yesterday it reassured readers there was "No military takeover".

Some privately owned newspapers have dared to address the possible end of Robert Mugabe's rule.

"Transitional govt planned … as Mugabe cornered," the Financial Gazette reports. "Zimbabwe scents the end of an era," it said.

"It could easily have been entitled The end of an error. A 37-year-old error," says a similarly headlined commentary in NewsDay.

Was this a popular uprising?