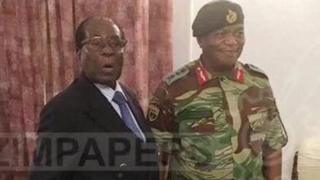 Zimbabwe latest: Mugabe in crunch talks over his future

Zimbabwe's long-time President Robert Mugabe has been holding direct talks with the army over his future.

Pictures emerged of the 93-year-old meeting the army chief and two envoys from South Africa at his official residence in Harare.

The army put Mr Mugabe under house arrest on Wednesday after moving in to take control.

The crisis stems from a power struggle in recent months over who might succeed him – his wife Grace Mugabe or former Vice President Emmerson Mnangagwa.

Last week, Mr Mugabe came down in favour of his wife, sacking Mr Mnangagwa and provoking the ire of the army chiefs.

Alongside them was Father Fidelis Mukonori, a Roman Catholic priest known to Mr Mugabe for years, who has been brought in to mediate.

Sources close to the talks say Mr Mugabe – who has been in control of Zimbabwe since it threw off white minority rule in 1980 – is refusing to stand down voluntarily before next year's planned elections.

"He is refusing to step down. I think he is trying to buy time," one source close to the army leadership told the AFP news agency.

Zanu-PF officials had earlier suggested Mr Mugabe could remain nominally in power until the party congress in December, when Mr Mnangagwa would be formally installed as party and national leader.

What is the view among Zimbabweans?

By Anne Soy in Zimbabwe

Many Zimbabweans almost instantly warmed to the military's move to take control of the country, and confine President Mugabe to his official residence.

"The military has done a good thing," says one bookseller. "They will ensure we get a transitional government."

He is firmly convinced that Mr Mugabe's 37-year rule is coming to an end.

There has been a sudden change of tone in the country, and the sense is that many Zimbabweans have been yearning for change.

Any change, it seems, would do.

Read more on this

What do South Africa and the region want?

They will be pushing for a democratic solution. The body, which represents 16 countries, does not support coup-led governments as this would set a dangerous precedent in the largely peaceful region, says the BBC's Pumza Fihlani in Johannesburg.

The head of the African Union (AU), Guinean President Alpha Condé, was clear the AU would "in no case accept" a military seizure of power. He said he was "inviting the army to return to its barracks and return to constitutional order".

Mr Tsvangirai, head of the Movement for Democratic Change-Tsvangirai (MDC-T) party and the main opposition leader in Zimbabwe, said on Thursday: "In the interests of the people, Mr Robert Mugabe must resign… immediately."

Mr Tsvangirai, who has been abroad receiving treatment for cancer, also called for a "negotiated all-inclusive transitional mechanism" that would lead to "comprehensive reforms for free and fair elections to be held".

This has been echoed by another Zimbabwean opposition leader, Tendai Biti, who also spoke of the need for a "transitional period".

Early reports suggested Mrs Mugabe had fled to Namibia, but sources now say she is in the family compound along with senior figures from the "Generation-40" group that backs her – cabinet ministers Jonathan Moyo and Saviour Kasukuwere.

Local media reports say a number of other senior members of the "Generation-40" group have also been detained.

How did the military takeover come about?

In the early hours of Wednesday, Zimbabwe's military took over the headquarters of national broadcaster ZBC and issued a statement saying they were targeting "criminals" around President Mugabe.

Troops and armoured vehicles encircled parliament and other key buildings throughout the day.

On Monday, Gen Chiwenga had warned the army would intervene to end what he called the "purging" of Zanu-PF members "with a liberation background", referring to the country's struggle for independence.